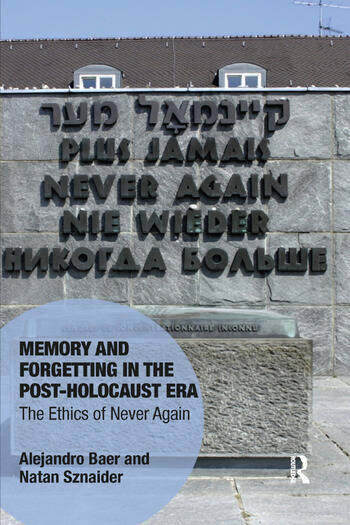 Memory and Forgetting in the Post-Holocaust Era: The Ethics of Never Again

To forget after Auschwitz is considered barbaric. Baer and Sznaider question this assumption not only in regard to the Holocaust but to other political crimes as well. The duties of memory surrounding the Holocaust have spread around the globe and interacted with other narratives of victimization that demand equal treatment. Are there crimes that must be forgotten and others that should be remembered?

In this book the authors examine the effects of a globalized Holocaust culture on the ways in which individuals and groups understand the moral and political significance of their respective histories of extreme political violence. Do such transnational memories facilitate or hamper the task of coming to terms with and overcoming divisive pasts? Taking Argentina, Spain and a number of sites in post-communist Europe as test cases, this book illustrates the transformation from a nationally oriented ethics to a trans-national one. The authors look at media, scholarly discourse, NGOs dealing with human rights and memory, museums and memorial sites, and examine how a new generation of memory activists revisits the past to construct a new future. Baer and Sznaider follow these attempts to manoeuvre between the duties of remembrance and the benefits of forgetting. This, the authors argue, is the "ethics of Never Again."

3 Francoism reframed: the disappeared of the Spanish Holocaust

5 Beyond Antigone and Amalek : toward a memory of hope

Alejandro Baer is Associate Professor of Sociology, Stephen C. Feinstein Chair and Director of the Center for Holocaust and Genocide Studies at the University of Minnesota, USA.

Natan Sznaider is a Full Professor of Sociology at the Academic College of Tel-Aviv-Yaffo, Israel.

‘This book is a courageous critique of generalizing the Holocaust into a universal frame for evil and victimhood, and making the commemoration of massive violence a moral obligation. With sensitivity, the authors examine the costs of the ensuing divisiveness, and propose dialogue, compromise, and the acknowledgment of past suffering instead.’ - Antonius C. G. M. Robben, Utrecht University, Netherlands

‘… the authors’ general reflections about the mantra Never Again and the challenging and bold lesson of Memory and Forgetting in the Post-Holocaust Era regarding the ‘dark side’ of the well-intentioned but complex idea of Never Again are an important message for activists, practitioners, scholars and citizens alike.’ - European Journal of Cultural and Political Sociology

Memory and Forgetting in the Post-Holocaust Era: The Ethics of Never Again