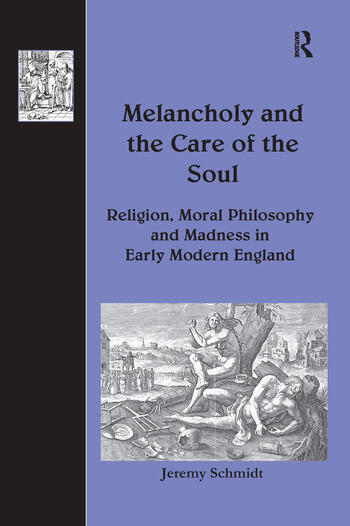 Melancholy and the Care of the Soul: Religion, Moral Philosophy and Madness in Early Modern England

Melancholy is rightly taken to be a central topic of concern in early modern culture, and it continues to generate scholarly interest among historians of medicine, literature, psychiatry and religion. This book considerably furthers our understanding of the issue by examining the extensive discussions of melancholy in seventeenth- and eighteenth- century religious and moral philosophical publications, many of which have received only scant attention from modern scholars. Arguing that melancholy was considered by many to be as much a 'disease of the soul' as a condition originating in bodily disorder, Dr. Schmidt reveals how insights and techniques developed in the context of ancient philosophical and early Christian discussions of the good of the soul were applied by a variety of early modern authorities to the treatment of melancholy. The book also explores ways in which various diagnostic and therapeutic languages shaped the experience and expression of melancholy and situates the melancholic experience in a series of broader discourses, including the language of religious despair dominating English Calvinism, the late Renaissance concern with the government of the passions, and eighteenth-century debates surrounding politeness and material consumption. In addition, it explores how the shifting languages of early modern melancholy altered and enabled certain perceptions of gender. As a study in intellectual history, Melancholy and the Care of the Soul offers new insights into a wide variety of early modern texts, including literary representations and medical works, and critically engages with a broad range of current scholarship in addressing some of the central interpretive issues in the history of early modern medicine, psychiatry, religion and culture.

Jeremy Schmidt is in the Department of History at the University of Victoria, Canada

'Jeremy Schmidt reminds us that melancholy and depression have rarely been mere disorders of the body or the mind, that they affect the whole person and display moral, religious, cultural and social dimensions. Through a study of seventeenth- and eighteenth-century English writers, including physicians such as Thomas Willis and George Cheyne, Anglicans such as Simon Patrick, and nonconformists such as Richard Baxter, he helpfully focuses our attention upon the religious and moral dimensions of souls in anguish. It was only later that an exclusively medical language suppressed the languages of consolation. He suggests that priests and philosophers need to be brought back into the care of the melancholy.' H. C. Erik Midelfort, University of Virginia, USA 'Melancholy and the Care of the Soul is an original and important reassessment of madness and religion in early modern England. Jeremy Schmidt gracefully elucidates the intertwining of medicine, religion, and moral philosophy in the creation of the melancholic individual, whose "disease of the soul" was a product of the wider cultural crisis of the seventeenth century. Highly recommended.' Anita Guerrini University of California, Santa Barbara, USA. ’... this well-researched book successfully re-evaluates Early Modern melancholy in a manner that invites further study.’ Parergon ’Jeremy Schmidt's book is a fine analysis of melancholy as a species of madness in nearly the full gamut of its early modern complexity...’ ISIS ’... this book sets out the broad history and contexts of the intertwining of religion, melancholy and moral philosophy with clarity and sound scholarship, as well as an astutue awareness of what is at stake for the present in our engagements with madness in the past. Anyone working on the history of mental disorder in this period will find this an invaluable addition to the literature.’ History of Psychiatry ’This is captivating reading.’ Care Management Journal ’While J

Melancholy and the Care of the Soul: Religion, Moral Philosophy and Madness in Early Modern England