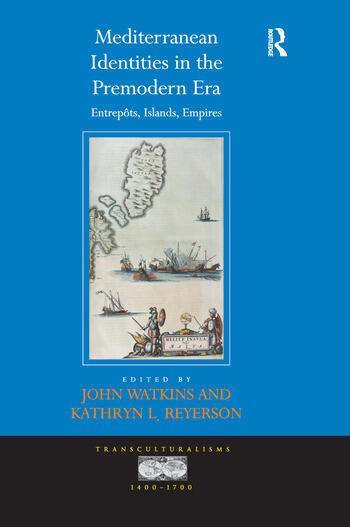 The first full length volume to approach the premodern Mediterranean from a fully interdisciplinary perspective, this collection defines the Mediterranean as a coherent region with distinct patterns of social, political, and cultural exchange. The essays explore the production, modification, and circulation of identities based on religion, ethnicity, profession, gender, and status as free or slave within three distinctive Mediterranean geographies: islands, entrepôts and empires. Individual essays explore such topics as interreligious conflict and accommodation; immigration and diaspora; polylingualism; classical imitation and canon formation; traffic in sacred objects; Mediterranean slavery; and the dream of a reintegrated Roman empire. Integrating environmental, social, political, religious, literary, artistic, and linguistic concerns, this collection offers a new model for approaching a distinct geographical region as a unique site of cultural and social exchange.

'Mediterranean Identities covers a remarkable variety of social geographies and identities, in both Christian- and Muslim-held territories, aptly reflecting the complexities of the region itself. The editors have assembled an impressive breadth of authors from across multiple disciplines and national traditions, all of whom handle the intricacies of their subjects with subtlety and rigor.' Julia Schleck, University of Nebraska, Lincoln and author of Telling True Tales of Islamic Lands: Forms of Mediation in English Travel Writing

'... the volume's essays emphasize the flexibility, contextualized nature, multiplicity, and performativity of premodern identity. ... These fourteen diverse essays speak to vital issues in the current study of the medieval Mediterranean, and those interested in either the premodern Mediterranean or in the concept of identity will want to consult this volume.' Medieval Review

'This volume of readable, well-edited, and engaging essays covers considerable ground in proving the truth of its editors' claims ... [this is a] diverse and thoughtfully curated collection. It should be a boon to any reader with an interest in the diversity and interdependency of Mediterranean identities in the premodern world.' Parergon

'This stimulating collection of essays about Mediterranean identities ... exemplifies the benefits of interdisciplinary approaches. The editors are distinguished experts in the study of the history of identities, and they have assembled a strong team of contributors.' Journal of Early Modern History