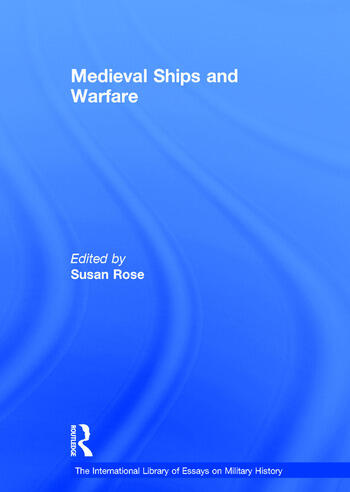 This collection of essays and articles from a wide range of journals is intended to make more accessible to students and scholars some of the most important writing in English in this field from the 1950s to the present day. The volume draws attention to work on both the design and the use of ships in warfare in the period c.1000-c.1500. The collection deals with both the Mediterranean and northern waters in this period and not only makes clear what work has been done in this field but indicates areas where more research is needed.

Contents: Series preface; Introduction; Part I North Western Europe: Ships and Boats: Issues of Technology and Evidence: Documentary sources and the medieval ship: some aspects of the evidence, Ian Friel; English galleys 1272-1377, J.T. Tinniswood; The building of the Lyme galley, 1294-1296, Ian Friel; Bayonne and the king's ships, 1204-1420, Susan Rose. Piracy and Pirates: John Crabbe: Flemish pirate, merchant and adventurer, Henry S. Lucas; Henry IV and the English privateers, Stephen P. Pistono; Piracy or policy: the crisis in the Channel, 1400-1403, C.J. Ford. Fleets and Warfare: The Battle of Damme - 1213, F.W. Brooks; God, leadership, Flemings and archery: contemporary perceptions of victory and defeat at the Battle of Sluys, 1340, Kelly De Vries; The effects of the Battle of Sluys upon the administration of English naval impressment, 1340-1343, J.S. Kepler; The naval service of the Cinque Ports, N.A.M. Rodger; The Earl of Warwick's domination of the Channel and the naval dimension of the Wars of the Roses, 1456-1460, Colin Richmond. Part II The Mediterranean: Islam versus Christendom: the naval dimension, 1000-1600, Susan Rose. The Islamic Powers: The Fatimid navy during the early crusades, 1099-1124, William Hamblin; The Mamluks and naval power: a phase of the struggle between Islam and Christian Europe, David Ayalon; The place of Saladin in the naval history of the Mediterranean sea in the middle ages, A.S. Ehrenkreutz; Piracy as an Islamic-Christian interface in the 13th century, Robert I. Burns; Rotting ships and razed harbors: the naval policy of the Mamluks, Albrecht Fuess. Iberia: The naval battles of Roger of Lauria, John H. Pryor; The Catalan fleet and Moorish sea-power (1337-1344), J.A Robson; Ships of the 13th-century Catalan navy, Lawrence V. Mott; The warships of the kings of Aragon and their fighting tactics during the 13th and 14th centuries AD, Frederico Foerster Laures; Reportage representation and reality: the extent to w

Susan Rose is from the Department of History at the Open University, UK.

'Those interested in English and Mediterranean naval warfare, will find great riches in Medieval Ships and Warfare.' Journal of Military History 'This volume on naval warfare is very welcome...' The Medieval Review