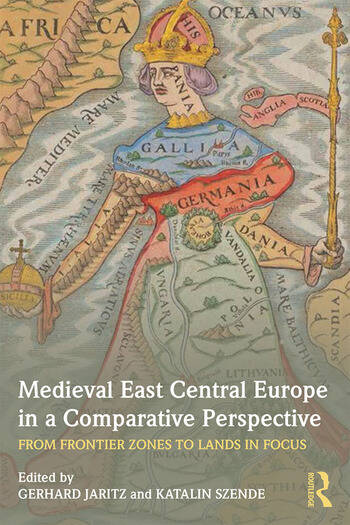 Medieval East Central Europe in a Comparative Perspective: From Frontier Zones to Lands in Focus

Including 15 original chapters from an interdisciplinary team of contributors, this collection begins by posing the question: "What is East Central Europe?" with three specialists offering different interpretations and presenting new conclusions. The book is then grouped into five parts which examine political practice, religion, urban experience, and art and literature. The contributors question and explain the reasons for similarities and differences in governance and strategies for handling allies, enemies or subjects in particular ways. They point out themes and structures from town planning to religious orders that did not function according to political boundaries, and for which the inclusion of East Central European territories was systemic.

What is East Central Europe?

, The Emergence of East Central Europe and Approaches to Internal Differentiation

, The Notion of ‘Central Europe’ in Russian Historical Scholarship

, Between Empires: South-Eastern Europe and the Two Roman Empires in the Middle Ages

, Town Foundations in East Central Europe and the New World: the Use of the Grid Plan in a Comparative Perspective

Béla Zsolt Szakács, The Place of East Central Europe on the Map of Romanesque Architecture

, Intersections: Medieval East Central Europe from the Perspective of Literacy and Communication

, Etymological Argumentation as a Category of Historiographic Thought in Historical Writings of Bohemia, Poland, and Hungary

What did we learn? What is to be done? Some insights and visions after reading this book

Gerhard Jaritz is Professor of Medieval Studies at the Central European University, Hungary. His previous publications include Angels, Devils: The Supernatural and its Visual Representation (2011) and Images, Ritual and Daily Life. The Medieval Perspective (2012).

Katalin Szende is Associate Professor of Medieval Studies at the Central European University, Hungary. Her previous publications include Generations in Towns: Succession and Success in Pre-Industrial Urban Societies (edited with F-E Eliassen, 2009) and Segregation – Integration – Assimilation. Religious and Ethnic Groups in the Medieval Towns of Central and Eastern Europe (edited with D Keene and B Nagy, 2009).

"This is the first book to look not only at the nature, composition and character of East Central Europe in the Middle Ages but also at its intellectual construction. A comprehensive range of contributions, involving much comparative material and supported by extensive bibliographies, illustrates the region’s complexity and the difficulties of its definition. The individual essays are supported by extensive bibliographies, making them chapters of first resort for those interested in the principal themes of European medieval history."
Martyn Rady, Masaryk Professor of Central European History, University College London, UK

"East Central Europe is nowadays attracting more and more attention, but rarely in a comparative perspective. This is therefore no conventional handbook or introductory survey. Under the direction of Gerhard Jaritz and Katalin Szende, an array of scholars offer a variety of original and at times surprising perspectives. The essays, which vary in topics from towns and monasticism to historiography, to political representation, to church architecture, to literacy and etymological argumentation, illustrate both general European developments in the Middle Ages as well as the particular factors of the East Central region. These essays make a valuable contribution to a topic that has generally been treated only in a narrow context, and explain why the medieval history of the region has often been marginalized or misunderstood, and why it should matter to us today."
Florin Curta, University of Florida, USA

Medieval East Central Europe in a Comparative Perspective: From Frontier Zones to Lands in Focus