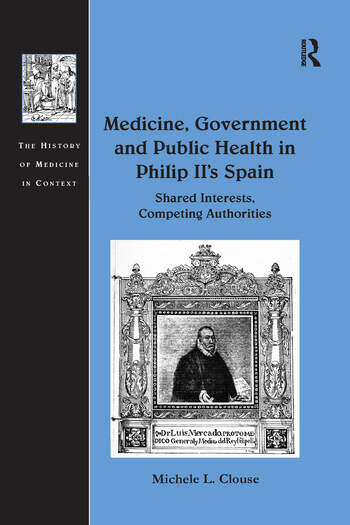 Bridging the gap between histories of medicine and political/institutional histories of the early modern crown, this book explores the relationship between one of the most highly bureaucratic regimes in early modern Europe, Spain, and crown interest in and regulation of medical practices. Complementing recent histories that have emphasized the interdependent nature of governance between the crown and municipalities in sixteenth-century Spain, this study argues that medical policies were the result of negotiation and cooperation among the crown, the towns, and medical practitioners. During the reign of Philip II (1556-1598), the crown provided unique opportunities for advancements in the medical field among practitioners and support for the creation and dissemination of innovative medical techniques. In addition, crown support for and regulation of medicine served as an important bureaucratic tool in the crown's effort to expand and solidify its authority over the distinct kingdoms and territories under Castilian authority and the municipalities within the kingdom of Castile itself. The crown was not the only agent of change in the medical world, however. Medical policies and their successful implementation required consensus and cooperation among competing political authorities. Bringing to life a cast of characters from early modern Spain, from the female empiric who practiced bonesetting and surgery to the university-trained, Latin physician whose medical textbook standardized medical education in the universities, the book will broaden the scope of medical history to include not only the development of medical theory and innovative practice, but also address the complex tensions between various authorities which influenced the development and nature of medical practice and perceptions of 'public health' in early modern Europe. Juxtaposing the history of medicine with the history of early modern state-building brings a unique perspective to this challenging book that reassesses the relationship between the monarch and intellectual milieu of medicine in Spain. It further challenges the dominance of studies of medical regulation from France and England and illuminates a diverse and innovative world of Spanish medical practice that has been neglected in standard histories of early modern medicine.

Michele L. Clouse is Assistant Professor in the Department of History at Ohio University and specializes in the history of medicine, with a particular interest in the intersection between the political, legal, and social history of early modern Europe, 1400-1750.

'... a well-researched and thoughtful consideration of the many players involved and influences on politico-medicinal policy.' Watermark '... addresses the tensions between the various authorities who shaped perceptions of public health and the development and nature of medical practice, and brilliantly bridges the gap between institutional and regulatory dimensions, and actual medical practices in the marketplace.' Year’s Work in Modern Language Studies 'Clouse’s thoughtful, balanced, and insightful analysis is highly engaging. Historical vignettes illustrate the larger argument of the book, while allowing insight to the medical context of the time and the cosmology of medical practitioners (be they popular or conventionally trained) in Philip II’s Spain.' Bulletin of the History of Medicine 'In spite of the exponential growth of medical history research in recent decades, English-language studies on early modern Spanish medicine are still few and far between. Michele L. Clouse’s new book, Medicine, Government, and Public Health in Philip II’s Spain compensates skillfully for this lack of attention... an unprecedented and highly recommended monograph.' Renaissance Quarterly '[Clouse’s] volume is rich in detail, judicious in its judgments, and sensible in its conclusions. Above all, she paints a picture of a society filled with people coping as best as they could. Some were admirable, some less so, but she has a wonderful sympathy for them all.' American Historical Review '... a highly informative study of the role of the Crown in the process of medical professionalisation in early modern Spain.' Social History of Medicine '... rich research and detailed engagement with the literature on the history of medicine make this book an important addition to the literature on early modern Spain.' European History Quarterly 'In examining the regulation of medicine, Clouse builds upon foundational work from numerous Spanish scholars whose research, ove