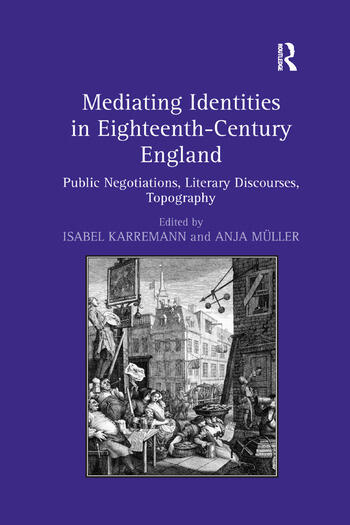 Through case studies from diverse fields of cultural studies, this collection examines how different constructions of identity were mediated in England during the long eighteenth century. While the concept of identity has received much critical attention, the question of how identities were mediated usually remains implicit. This volume engages in a critical discussion of the connection between historically specific categories of identity determined by class, gender, nationality, religion, political factions and age, and the media available at the time, including novels, newspapers, trial reports, images and the theatre. Representative case studies are the arrival of children's literature as a genre, the creation of masculine citizenship in Defoe's novels, the performance of gendered and national identities by the actress Kitty Clive or in plays by Henry Fielding and Richard Sheridan, fashion and the public sphere, the emergence of the Whig and Tory parties, the radical culture of the 1790s, and visual representations of domestic and imperial landscape. Recognizing the proliferation of identities in the epoch, these essays explore the ways in which different media determined constructions of identity and were in turn shaped by them.

'The essays in this collection each make interesting and nuanced arguments, combining a good mix of wide theoretical considerations with carefully applied readings.' Notes and Queries