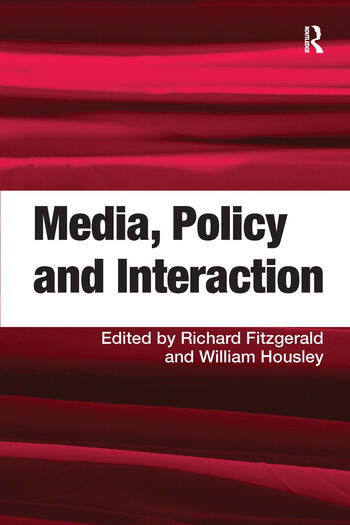 Situated within the field of discourse-oriented approaches to policy and media, this collection explores the interface between government, media and the public, highlighting the increasing importance placed on media channelled 'public opinion' as part of a democratic process. The authors use a variety of discourse analytic methods including CA/MCA, Discourse Analysis and Interactionism, to provide discussions around the social organization of policy debate in media sites including news interviews, public access broadcasts, broadcast debates, panel discussions, mediated government initiatives, newspapers and news broadcasts. The book's geographical coverage spans the USA, Canada, the UK, Europe, Asia and Australia. This volume offers a major contribution to discourse analysis and its emphasis on policy substance will appeal to a broad audience in social and public policy, political communication, journalism and politics.

'Investigation of the role of media in public life through analysis of talk is now well established. Media, Policy and Interaction is a valuable volume that elucidates some aspects of that role in a range of societies using methods inspired by ethnomethodology. It brings together eleven original contributions. Especially enjoyable were those from lively younger researchers.' Ivan Leudar, Manchester University, UK 'This book, comprised of contributions from a multi-disciplinary team of authors around a common theme of public policy and the news providers through which it is mediated, is a useful addition to the literature and contains much that will recommend it to students of journalism theory, among other fields.' Peter Anderson, University of Central Lancashire, UK 'This is an important contribution to the growing field of research on language practices in mediated politics. Rich in examples and powerful and detailed analyses, the book provides new insights into how politics is communicated in various media contexts. Focusing on framing, social categorisations, talk and interaction the authors explore the relations between practices on micro level and wider political discourses.' Mats EkstrÃ¶m, Ã–rebro University, Sweden '... each chapter of Media, Policy and Interaction is structured according to the same logical steps, always with a strong insistence on the methodological choices and the highlighting of a detailed conceptual framework. Therefore, from a methodological perspective, this book is very well constructed: each author provides a theoretical framework plus some accurate definitions each time a new concept is brought in... the impressive variety of countries studied here (from Belarus to Egypt, Switzerland, Finland, Canada, and others) should not lead any reader to wrongly conclude that this book might be too far from one's own region or reality. Quite the opposite; because of the variety of political contexts (like the almost totalitarian regime in Belarus), the analysis which emerges is perhaps easier to follow and the methodological frameworks used in these chapters could probably be adapted and re-used elsewhere in different contexts for other research purposes... Fitzgerald and Housley have produced a rigorous collection with many interdisciplinary and multidisciplinary contributions that will be useful for graduates in discourse studies and political communication, but also in social sciences, geopolitics, media and cultural studies.' Discourse Studies