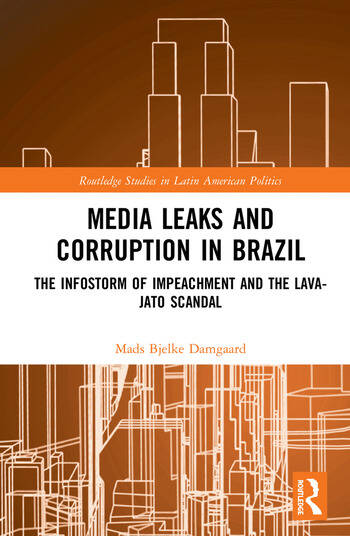 Media Leaks and Corruption in Brazil: The Infostorm of Impeachment and the Lava-Jato Scandal

Analyzing the political consequences of the most extensive corruption investigation in recent Latin American history, Operação Lava-Jato, Media Leaks and Corruption in Brazil answers two central questions about the contradictory effects news media has on political systems. First, how can political actors in a seemingly well-functioning democracy quickly override checks and balances, and replace a head of state with a corrupt vice-president? Second, how can very active news media, while ostensibly performing the role of the watchdog, still fail to deliver media accountability to the public?

Combining a quantitative view of the media sphere with case studies of the leaks, legal actions, and alliances forming and breaking in the Brazilian Congress, Mads Bjelke Damgaard demonstrates that the media’s attention to leaks and investigations of corruption paved the way for Dilma Rousseff’s impeachment. By timing the disclosure of information in scandals, actors with inside information were able to drive the media agenda and let some scandals escape from the limelight. The book delivers an in-depth study of how scandals become political weapons in a time of media personalities and post-politics.

This book will interest scholars of Latin American Studies, and Brazil, and the broader fields of media studies, democracy studies, and journalism studies.

2. The Media System and Political Journalism of Brazil

3. Leaks and Their Effect in Media and on Politics

4. Lawfare and the Judiciary-Political Relations during the Lava-Jato Corruption Scandal

5. The Informational Cascades of Impeachment and the Lava-Jato Scandal

Mads Bjelke Damgaard is PhD fellow in the Department of English, Germanic and Romance Studies at the University of Copenhagen, Denmark. He has previously worked at the University of Southern Denmark as well as the Department of Cross-cultural and Regional Studies, Science of Religions Section at the University of Copenhagen. When living in Rio de Janeiro and Brasília, he was visiting PhD fellow with the Universidade de Brasília and has collaborated with the media research group LEMEP (Laboratório de Estudos de Mídia e Esfera Pública) of the state university UERJ in Rio. He has previously published on corruption and Brazil in the King’s College-based journal Brasiliana and the journal Ephemera – Theory & Politics in Society.

'Studies about corruption scandals and democracy often share the unquestioned and problematic assumption that investigative journalism and an active and independent judiciary necessarily result in better accountability. In this insightful and rigorous investigation of the most extensive corruption investigation in recent Latin American history, Brazil’s Operation Lava-Jato, Mads Damgaard demonstrates that political actors can collude with media organizations, political institutions and accountability agencies to achieve their own strategic goals and escape legal responsibility. Based on case studies and extensive analysis of news coverage, this book is a timely and provocative work that illuminates key democratic deficits of Brazil’s recent political transformation.'

'While some studies of Brazilian politics have examined mass media behavior during corruption scandals and other have analyzed the role of "lawfare" in unseating incumbents, Mads Damgaard is the first scholar to systematically connect the two phenomena. The result is a sophisticated study of how media spin and an activist judiciary are both causes and consequences of Brazil’s increasing polarization.'

Media Leaks and Corruption in Brazil: The Infostorm of Impeachment and the Lava-Jato Scandal