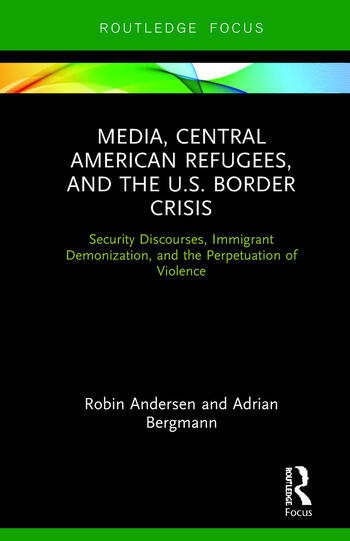 This book identifies the history, conventions, and uses of security discourses, and argues that such language and media frames distort information and mislead the public, misidentify the focus of concern, and omit narratives able to recognize the causes and solutions to humanitarian crises.

What has been identified as a crisis at the border is better understood as an on-going crisis of violence, building over decades, that has forced migrants from their homes in the countries of the Northern Triangle. Authors Robin Andersen and Adrian Bergmann look back to U.S. military policies in the region and connect this legacy to the cross-border development of transnational gangs, government corruption, and on-going violence that often targets environmental and legal defenders. They argue that the discourses of demonization and securitization only help perpetuate brutality in both Central America and the United States, especially in the desert borderlands of the southwest. They offer ways in which stories of migrants can be reframed within the language of justice, empathy, and humanitarianism.

A compelling examination of language, media, and politics, this book is both highly contemporary and widely applicable, perfect for students and scholars of global media, political communications, and their many intersections.

From the Civil War in El Salvador to MS-13: Media Frames that Distort, Mislead and Omit

Violence, Migration, and the Perverse Effects of Gang Repression in Central America

The Photograph Seen "Around the World": Media, the Migrant Mother From Honduras, and the U.S.- Backed Military Coup of 2009

Guatemala and the Extractive Industries: Media Fail to Connect Migrant Girl who Died on Custody to Years of Post-Colonial Oppression and Genocide

Violence and Brutality at the U.S. Border and Beyond: The Media and the Perpetuation of Militarism in the Hemisphere

Robin Andersen is Professor of Communication and Media Studies at Fordham University. She is the author of seven books and dozens of book chapters and journal articles, and writes media analysis and criticism for a variety of publications. She co-edited the Routledge Companion to Media and Humanitarian Action, and she is now editing the Routledge Focus on Media and Humanitatarian Action series. She also recently published, HBO’s Treme and the Stories of the Storm: From New Orleans as Disaster Myth to Groundbreaking Television. Her 2006 book A Century of Media: A Century of War won the 2007 Alpha Sigma Nu Book Award from the Honor Society of Jesuit Colleges and Universities. She is a Project Censored Judge, and her article for Fairness and Accuracy in Reporting was recognized as a Top Ten Story for 2018.

is a Research Fellow at the Institute of Historical, Anthropological, and Archaeological Studies of the University of El Salvador, where he conducts interdisciplinary research on peace building, conflict transformation, and violence reduction. Previously, he held the Chair of Peace Culture at Don Bosco University, and he has worked as a scholar and practitioner with street children, sex workers, gang members, police officers, and policy-makers. At present, he is focused on the transformation of dynamics of armed violence, the role of the state in the production of violence, and strategies for constructive engagement with gangs.