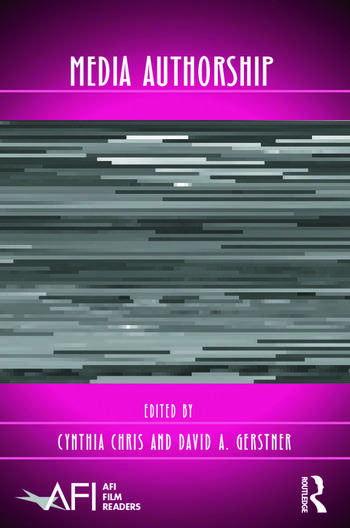 Contemporary media authorship is frequently collaborative, participatory, non-site specific, or quite simply goes unrecognized. In this volume, media and film scholars explore the theoretical debates around authorship, intention, and identity within the rapidly transforming and globalized culture industry of new media. Defining media broadly, across a range of creative artifacts and production cultures—from visual arts to videogames, from textiles to television—contributors consider authoring practices of artists, designers, do-it-yourselfers, media professionals, scholars, and others. Specifically, they ask:

By addressing these issues, Media Authorship demonstrates that the concept of authorship as formulated in literary and film studies is reinvigorated, contested, remade—even, reauthored—by new practices in the digital media environment.

Cynthia Chris is Associate Professor of Media Culture at the College of Staten Island, City University of New York. She is the author of Watching Wildlife and co-editor, with Sarah Banet-Weiser and Anthony Freitas, of Cable Visions: Television Beyond Broadcasting.

David A. Gerstner is Professor of Cinema Studies at the City University of New York's Graduate Center and the College of Staten Island. He is the author of Queer Pollen: White Seduction, Black Male Homosexuality, and the Cinematic and Manly Arts: Masculinity and Nation in Early American Cinema. He is also editor of The Routledge International Encyclopedia of Queer Culture, and co-editor with Janet Staiger of Authorship and Film.