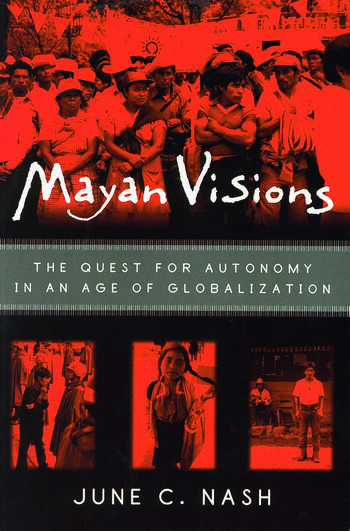 Mayan Visions: The Quest for Autonomy in an Age of Globalization

A significant work by one of anthropology's most important scholars, this book provides an introduction to the Chiapas Mayan community of Mexico, better known for their role in the Zapatista Rebellion.

June Nash is Distinguished Professor Emeritus of Anthropology at the City College of New York and Graduate Center. She is the author of We Eat the Mines and the Mines Eat Us (1993). She was awarded the American Anthropologist's Distinguished Service Award in 1995.

"Drawing perspective from career-long study of worker and peasant activism in the Americas, Nash argues that the Zapatista rebellion has energized new and hopeful efforts combining grass-roots and global activism for justice, rights, and viable livelihoods into pluricultural initiatives attentive to ethnic, class, and gender equity. Mayan Visions is the most useful study to date on this confluence of indigenous, grass roots, and national and global civil society activism in Chiapas." -- George A. Collier, Professor of Cultural and Social Anthropology, Stanford University ** wants to see revisions.
"June Nash, one of the living icons of the practice of modern anthropology as both a humanistic and socially committed discipline, offers us in this wonderful new book her own retrospective vision of almost half a century in the intellectual and political history of Maya studies in Chiapas. This book documents, with compassion and formidable scholarship, the moving tale of how the Maya people of Chiapas are currently, through their own agency, charting a set of plans for cultural autonomy as Maya civilization moves into its fourth millennium." -- Gary H. Gossen, Distinguished Professor Emeritus of Anthropology and Latin American Studies,University of Albany, SUNY
"An extraordinary book by one of our great anthropologists. June Nash shows us how the Zapatista Movement is one expression of wide ranging social movements in which marginalized people struggle to find their place in the newly emerging global order. Theirs is not a call for a return to the past but an engagement with the possibility of a different future." -- Saskia Sassen, author of Globalization and Its Discontents
"Mayan Visions is a marvelous juxtaposition of global political dynamics and local ethnography. There are lessons here for readers in every country of the world. This book is a powerful illustration of how global policy makers can learn much from a clear, subtle account by a very wise anthropologist." -- Terry Nichols Clark, Professor of Sociology, The University of Chicago
"[B]rilliant and engaging...This is a major rethinking of the role of anthropology in the study of globalization and the role of indigenous people as international protaganists." -- Kay Warren, Harvard University

Mayan Visions: The Quest for Autonomy in an Age of Globalization