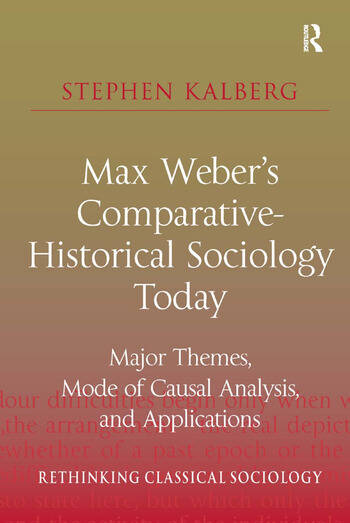 Bringing together the author's major scholarly work on Weber over the last thirty years, Max Weber's Comparative-Historical Sociology Today addresses major themes in Weber's thought, whilst also examining the mode of analysis practised in his comparative-historical writings. By exploring Weber's concepts and procedures, the individual chapters seek to convey the rigor of his research strategies, demonstrating their uniqueness. In this light, this study proceeds to identify as incomplete and then reconstruct the analyses undertaken by Weber of the rise of Confucianism in China, the caste system in India, and monotheism in ancient Israel. The analysis then advances to the modern era, utilising Weber's research procedures to explain the origins of four independent phenomena: the singularity of the American political culture, the cultural foundations of modern citizenship, cultural pessimism (Kulturpessimismus) in nineteenth century Germany, and the 'location' of work in contemporary German society. A dialogue with a variety of recent major schools is pursued throughout this volume. Offering a rich examination of the major themes in Weber's sociology, alongside a reconstruction of his mode of analysis and application of his approach, this book will appeal to scholars around the world with interests in social theory, German and American societies, cultural sociology, political sociology, the sociology of knowledge, comparative-historical sociology, and the sociology of civilizations.

Contents: Introduction; Part I Reconstructing Major Themes: Introduction; Max Weber's types of rationality: cornerstones for the analysis of Rationalization processes in history; Should the 'dynamic autonomy' of ideas matter to sociologists?; Max Weber on the origin of other-worldly salvation religions and the constitution of groups in American society today; The past and present influence of world views: Max Weber on a neglected sociological concept. Part II Weber's Mode of Causal Analysis: Introduction; The perpetual and tight interweaving of past and present in Max Weber's sociology; Macro comparisons: precautions, possibilities, achievements and limitations; The theoretical framework and causal methodology. Part III Reconstructing Significant Developments from Weber's Oeuvre: the Rise and Expansion of Confucianism, the Caste System, and Monotheism: Introduction; The rise and expansion of Confucianism in China; The rise and expansion of the caste system in India; The rise and expansion of monotheism in ancient Israel. Part IV Utilizing Weber I: the Importance of Deep Culture: Introduction: The legacies of ascetic Protestantism and American uniqueness: the political culture of the United States; The cultural foundations of modern citizenship. Part V Utilizing Weber II: Multi-Causal and Contextual-Conjectural Analysis: Introduction; The origin and expansion of Kulturpessimismus: the relationship between public and private spheres in early 20th-century Germany; Culture and the location of work in contemporary Western Germany: a Weberian configurational and comparative analysis. Part VI Conclusion: Bringing Weber Back In: Appendices; References; Index.

Stephen Kalberg is Associate Professor of Sociology at Boston University and Affiliate of the Center for European Studies, Harvard University, USA. He is author of 'Max Weber's Comparative Historical Sociology' and 'Max Weber Lesen', editor of 'Max Weber: Readings and Commentary on Modernity' and translator of 'Weber's The Protestant Ethic and the Spirit of Capitalism'.

'Stephen Kalberg has long been a penetrating and original interpreter of Weber's work. His publications stand out in the large Weber literature by focusing on Weber's modes of analysis that remain fruitful today, a century later. Putting that claim of continuing relevance to multiple tests, this is a significant publication.' Dietrich Rueschemeyer, Brown University, USA, author of Usable Theory: Analytic Tools for Social and Political Research 'Both in the complexity of his work and its relevance to the crisis of his time Weber finds in Kalberg a commentator who is equal to the task of demonstrating how only an equivalent project could match up to the demands that the current global crisis makes on social science.' Martin Albrow, University of Wales, UK 'Recommended. Upper-division undergraduates and above.' Choice