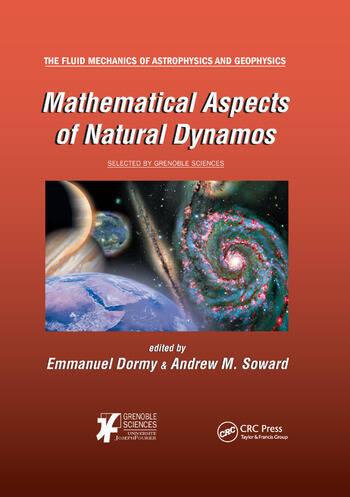 Although the origin of Earth's and other celestial bodies' magnetic fields remains unknown, we do know that the motion of electrically conducting fluids generates and maintains these fields, forming the basis of magnetohydrodynamics (MHD) and, to a larger extent, dynamo theory. Answering the need for a comprehensive, interdisciplinary introduction to this area, Mathematical Aspects of Natural Dynamos provides a foundation in dynamo theory before moving on to modeling aspects of natural dynamos.

Bringing together eminent international contributors, the book first introduces governing equations, outlines the kinematic dynamo theory, covers nonlinear effects, including amplitude saturation and polarity reversals, and discusses fluid dynamics. After establishing this base, the book describes the Earth's magnetic field and the current understanding of its characteristics. Subsequent chapters examine other planets in our solar system and the magnetic field of stars, including the sun. The book also addresses dynamo action on the large scale of galaxies, presents modeling experiments of natural dynamos, and speculates about future research directions.

After reading this well-illustrated, thorough, and unified exploration, you will be well prepared to embark on your own journey through this fascinating area of research.

"Dormy and Soward are the editors of the book, they have done a magnificent job in taking what was evidently a series of paper written by scientists from around the world and combining them into a single book that has a consistent tone throughout out."

". . . the quality of the text is high, and the content is far from reiterating previous works . . . highly recommended; particularly those new to the field, but also as a reference and refresher for those already immersed in the topic."