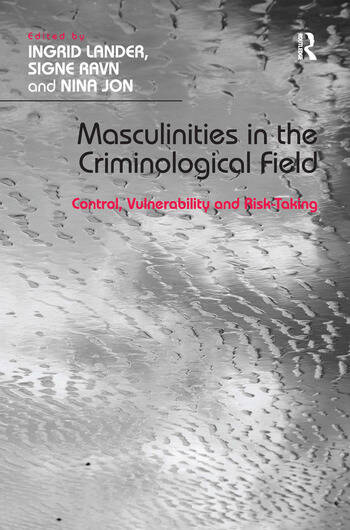 Masculinities in the Criminological Field: Control, Vulnerability and Risk-Taking

Over recent decades criminological research has changed from a gender-blind discipline which equated crime with men and thus ignored questions about gender, to an approach that studied gender by showing statistical differences between men and women, and then finally to a more inclusive and elaborate gender-theoretical approach to crime and crime control. However, despite this development, research on gender - and in particular research on gendered norms and the construction and enactment of masculinities - within the criminological field has been unable to keep up with developments in gender research. Since 1990, only a few anthologies with a gender-theoretical orientation focusing on masculinities within the criminological research field have been published. Many of the theoretical developments in gender research still have difficulties in reaching into mainstream criminology, partly because such developments are often published in feminist and/or gender theoretical journals. This volume both problematizes and renders visible conceptions and norms regarding male behaviour and masculinities and shows how these affect the criminological field through providing a theoretically sound and clear gender perspective to this field of research. With sections based around the following three themes: negotiations of masculinity in institutional settings, vulnerable masculinities and risk-taking and masculinities, this volume will be of interest to scholars of criminology, sociology, social work and gender studies, as well as policy-makers, and law enforcement professionals.

Ingrid Lander is Lecturer in the Department of Criminology at Stockholm University, Sweden. Signe Ravn is Researcher at the Danish National Centre for Social Research in Denmark. Nina Jon works for the Norwegian National Crime Prevention Council in Norway.

’Finally a book from Scandinavia on masculinities and crime! The editors bring together a fascinating diversity of perspectives into an intellectually powerful and provocative volume. Drawing on cutting-edge research, each scholarly chapter compellingly presents new material and/or new understandings of familiar material. This is an impressive volume that will be of much interest to a wide range of criminological, masculinities, and gender scholars.’ James W. Messerschmidt, University of Southern Maine, USA ’This collection is a thoughtful, thought-provoking analysis of the relationship between masculinities and crime. Presented as a "Nordic voice", it will have resonance beyond the bounds of Scandinavia. It is conceptually profound, empirically nuanced, and challenges those both within and without criminology who present gender as a simple or simplistic concept. It will undoubtedly become essential reading for anyone who claims to understand crime.’ Sandra Walklate, University of Liverpool, UK ’For decades, to study criminology meant to study men, who were so over-represented in the crime data as to be uninteresting. As a new generation of feminist scholars began to explore women's experience in all aspects of crime research, we began, at least to notice males, at least noting men's over-representation in crime, police, courts, and prisons. Now, finally, a new generation has begun to pose the fundamental question about gender - that is, what is the role of masculinity (our cultural ideas about men) that drives, informs and structures crime? This anthology adds to that new investigation, and, one hopes, criminology will never be the same again.’ Michael Kimmel, Stony Brook University, USA '... the book provides criminological studies that speak squarely to the difficult sociological questions posed by major social theorists like Connell, Butler, Kimmel and others. Taken collectively, this edition is therefore a fantastic contribution to a debate that

Masculinities in the Criminological Field: Control, Vulnerability and Risk-Taking