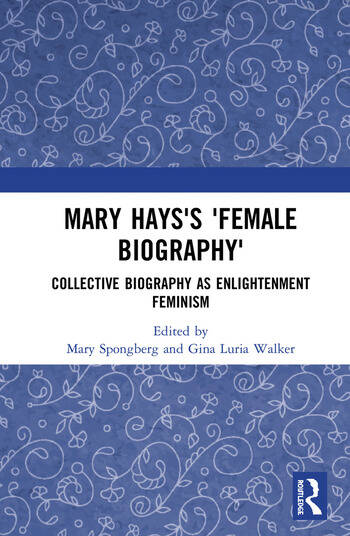 The essays included in Mary Hays’s ‘Female Biography’: Collective Biography as Enlightenment Feminism emerge from the authors’ collaboration in producing the first modern edition of Hays’s work in the Chawton House Library Edition (2013, 2014). This book explores Hays’s larger ambitions to lay the foundation for an encyclopaedic work by, for, and about women. The scholars’ contributions to this volume engage with some of the multiple problems and possibilities that Female Biography presented. Drawing on this effort, individual scholars examine Hays’s attempts to correct existing masculinist constructs which framed the ‘universe of knowledge’ then and persist in our time. Hays perceived that these had the cumulative effect of rendering women invisible. She responded to such absence by providing examples of the extent of female worth across Western society. Other contributions focus specifically on the subjects of Hays’s entries, looking at how she used source material and laid the groundwork for future biographical studies of women’s lives.

Both Female Biography and Hays herself have continually presented difficulties in categorization: not quite Enlightenment, not quite Victorian either. This book recontextualizes her work, demonstrating the radicalism and originality of her feminism, even in its post-Wollstonecraftian phase, as well as the longevity of her influence. As such, it will be of interest to those conducting research into Hays, her subjects, and the evolution of life-writing by women.

1. "I Sought & Made to Myself an Extraordinary Destiny" Gina Luria Walker

2. The Trial(s) of Queen Caroline and Hays’s Memoirs of Queens, Illustrious and Celebrated Mary Spongberg

8. "The Very Worst Woman I Ever Heard of": Rosina Bulwer Lytton and Biography as Vindication Marie Mulvey-Roberts

is Professor of Women’s Studies and Director of The New Historia at The New School, New York City, USA.