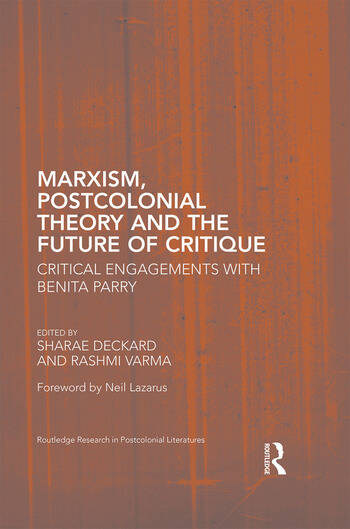 Marxism, Postcolonial Theory, and the Future of Critique: Critical Engagements with Benita Parry

Using the aesthetic and political concerns of Parry’s oeuvre as a touchstone, this book explores new directions for postcolonial studies, Marxist literary criticism, and world literature in the contemporary moment, seeking to re-imagine the field, and alongside it, new possibilities for left critique. It is the first volume of essays focusing on the field-defining intellectual legacy of the literary scholar Benita Parry. As a leading critic of the post-structuralist turn within postcolonial studies, Parry has not only brought Marxism and postcolonial theory into a productive, albeit tense, dialogue, but has reinvigorated the field by bringing critical questions of resistance and struggle to bear on aesthetic forms. The book’s aim is two-fold: first, to evaluate Parry’s formative influence within postcolonial studies and its interface with Marxist literary criticism, and second, to explore new terrains of scholarship opened up by Parry’s work. It provides a critical overview of Parry’s key interventions, such as her contributions to colonial discourse theory; her debate with Spivak on subaltern consciousness and representation; her critique of post-apartheid reconciliation and neoliberalism in South Africa; her materialist critique of writers such as Kipling, Conrad, and Salih; her work on liberation theory, resistance, and radical agency; as well as more recent work on the aesthetics of "peripheral modernity." The volume contains cutting-edge work on peripheral aesthetics, the world-literary system, critiques of global capitalism and capitalist modernity, and the resurgence of Marxism, communism, and liberation theory by a range of established and new scholars who represent a dissident and new school of thought within postcolonial studies more generally. It concludes with the first-ever detailed interview with Benita Parry about her activism, political commitments, and her life and work as a scholar.

Against the Grain: An Introduction to Benita Parry’s Intellectual Itinerary

‘I remember, I remember so as not to forget!’ Orhan Pamuk’s Melancholic Agency and the Splenetic Périples of Mediterranean Writing

‘Broken Histories’: The Modern and the Tribal in Arun Joshi’s The Strange Case of Billy Biswas RASHMI VARMA

5 "Not Even a Sci-Fi Writer": Peripheral Aesthetics, the World-System Novel, and Junot Díaz

6 Towards a Pre-History of National Liberation Struggle

8 Revolutionary Nationalism and Global Horizons: The Ghadar Party on Ireland and China

9 The Limits of African Nationalism: From Anti-Apartheid Resistance to Postcolonial Critique

12 "Intellectual Life: A Duty to Dissent": A Graduation Address at the University of York, 12 July 2006

13 Benita Parry’s Position: Talk given at the Benita Parry Conference at the University of Warwick, 17 November 2001

Sharae Deckard is Lecturer in World Literature at University College Dublin. She is author of Paradise Discourse, Imperialism and Globalization (Routledge 2010) and co-author with the Warwick Research Collective of Combined and Uneven Development: Towards a New Theory of World-Literature (Liverpool UP 2015). She has edited special issues of Ariel, The Journal of World-Systems Research, Green Letters, and The Journal of Postcolonial Writing. Her research centres on world-ecology and world-systems approaches to postcolonial and world literature.

teaches postcolonial and world literature and transnational feminist theory in the Department of English and Comparative Literary Studies at the University of Warwick. She is the author of The Postcolonial City and Its Subjects (2012) and of the forthcoming Modern Tribal: Representing Indigeneity in Postcolonial India. She is a founding editorial collective member of the journal Feminist Dissent. Most recently, she has co-edited (with Subir Sinha) a symposium on Marxism and postcolonial theory for the journal Critical Sociology.

Marxism, Postcolonial Theory, and the Future of Critique: Critical Engagements with Benita Parry