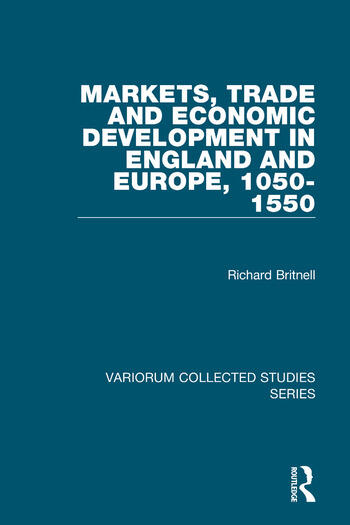 Markets, Trade and Economic Development in England and Europe, 1050-1550

England's economy between 1050 and 1550 mirrored that of much of continental Europe in its growing dependence upon trade over both short distances and long. The essays in this collection are the fruit of forty years of research into the complex and interrelated issues involved. Describing this change can be achieved in part through quantitative indices, such as the number and size of towns, markets and fairs, and the volume of monetary circulation. A full account also requires a discussion of widespread changes of work experience, customary practices and moral values as households became more dependent upon markets. In addition, the evidence of transformative commercial growth in the medieval period gives rise to numerous questions concerning its relationship to more modern times. Modern economic growth and modern capitalism have often been contrasted starkly with medieval economic stagnation and traditionalism, but recent research implies a more continuous process of economic development than that implied by these older stereotypes. Many of the items in this collection are also relevant to this more discursive aspect of medieval commercialisation.

Contents: Introduction; Local trade, remote trade: institutions, information and market integration, 1050-1330; English markets and royal administration before 1200; Boroughs, markets and trade in Northern England, 1000-1216; King John's early grants of markets and fairs; The proliferation of markets in England, 1200-1349; Burghal characteristics of market towns in medieval England; The making of Witham; Commercialisation and economic development in England, 1000-1300; Specialization of work in England, 1100-1300; Sedentary long-distance trade and the English merchant class in 13th-century England; England and Northern Italy in the early 14th century: the economic contrasts; The towns of England and Northern Italy in the early 14th century; Minor landlords in England and medieval agrarian capitalism; Production for the market on a small 14th-century estate; The Pastons and their Norfolk; Advantagium mercatoris: a custom in medieval trade; Forstall, forestalling and the Statute of Forestallers; Price-setting in English borough markets, 1349-1500; Urban economic regulation and economic morality in medieval England; Urban demand in the English economy, 1300-1600; Commerce and capitalism in late medieval England: problems of description and theory; Index.

Richard Britnell was emeritus Professor of History at the University of Durham and a Fellow of the British Academy, UK

’Medieval historians owe a debt to Ashgate for their Variorum Collected Studies series, which has made conveniently available so many valuable essays widely scattered in their original published forms. ... this volume is a most welcome addition to the series.’ English Historical Review ’Britnell is one of the most eminent scholars in the field of medieval English commercial history of the past 30 years... This collection of Britnell’s articles serves to highlight his high standards of scholarship and his pervading influence.’ Economic History Review

Markets, Trade and Economic Development in England and Europe, 1050-1550