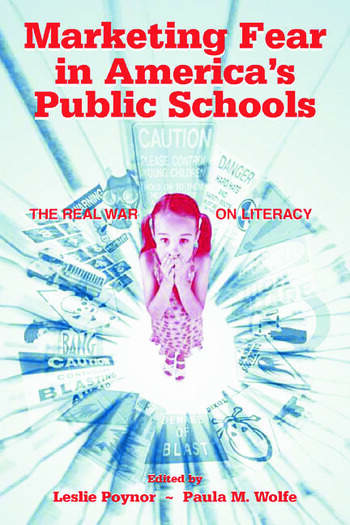 Marketing Fear in America's Public Schools: The Real War on Literacy is an eye-opening examination of the real world consequences of the political pressures and influences on teachers today. In particular, it looks at how the political actions of the conservative right disempower and control teachers, school districts, parents, and children through an atmosphere of fear used as a strategy to ensure that schools follow the conservative political agenda supporting and imposing mandates such as increased accountability, high stakes testing, and direct intense direct-instruction phonics programs. The book offers a unique look not at not only what the conservative factions are doing but why. The volume includes chapters on:
*resistance to the conservative agenda;
*national and/or federal agendas and actions that directly or indirectly contribute to the privatization and corporate control of public education;
*the linkage of federal policy to the disappearance or promotion of particular philosophical and pedagogical approaches; and
*the role of the media in perpetuating the agendas of the corporate and political right.

Many teachers across the U.S. are frustrated and angry about the outside legislative constraints placed on their work, but at the same time frightened of losing their jobs and/or being faced with a lawsuit. The book's premise is that one must understand the motives behind the current educational "reforms" in order to resist them. The editors and contributors envision the volume as a voice for an alternative to compliance with unreasonable mandates--and thus as a message of hope.

Marketing Fear in America's Public Schools: The Real War on Literacy is important reading for teachers; teacher educators; education students; school administrators and other education professionals; researchers concerned with literacy, critical theory, pedagogy, and educational policy; and parents and community activists concerned with the politics of schooling and school reform. It is will serve well as a text in a range of courses across the field of education.

A Web site for the book can be found at http://www.erlbaum.com/poynor.

"This is an extremely interesting volume that investigates, discusses, and exposes a number of current claims made by the No Child Left Behind Act and its supporting documents, such as the National Reading Panel's report that identifies the US educational system as 'performing very poorly.' This volume focuses on how negative claims have been 'sold' to the public and the hidden purposes behind the selling. Recommended."

"The manufacture of fear is vividly and compellingly depicted at various levels so that the reader can see how it is created in corporate, governmental, and ideological forms that concretely find their way into the individual level....This...is a necessary book that will help elucidate the issues and give readers both ideas and courage for fighting back"