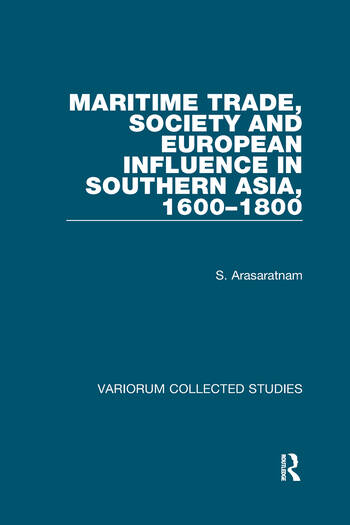 The particular focus of these articles is on the southern part of the Indian subcontinent and its relations with Southeast Asia. A number deal specifically with the Coromandel coast, its ports and merchant communities, while some are more concerned with the Indian Ocean region as a whole. In the 17th and 18th centuries the Indian Ocean littoral was an intense interaction between the European powers competing for Asian trade, and numerous Asian states and communities traditionally engaged in that trade. In his analysis Professor Arasaratnam argues that Asian trade peaked around the 1680’s, and that its subsequent decline should be linked to the consequences of the decline of the Mughal Empire. At the same time, the European trading companies, first the Dutch, then the English, with the French having some share, which had integrated themselves into the regional patterns of commerce, were then able to enhance their position: the Dutch had failed to establish a stranglehold, but by the end of this period the English had achieved domination, and not only over the coast, but the hinterland as well.

Contents: Pre-modern commerce and society in Southern Asia; The politics of commerce in the coastal kingdoms of Tamil Nad 1650-1700; Indian commercial groups and European traders, 1600-1800: changing relationships in southeastern India; Some notes on the Dutch in Malacca and the Indo-Malayan trade 1641-1670; Mare clausum, the Dutch and regional trade in the Indian Ocean 1650-1740; The Dutch East India Company and its Coromandel trade 1700-1740; Monopoly and free trade in Dutch-Asian commercial policy: debate and controversy within the VOC; Society, power, factionalism and corruption in early Madras 1640-1746; Factors in the rise, growth and decline of Coromandel ports circa 1650-1720; Indian intermediaries in the trade and administration of the French East India Company in the Coromandel (1670-1760); The Coromandel-Southeast Asia trade 1650-1740; Aspects of the role and activities of south Indian merchant communities c. 1650-1750; The Chulia Muslim merchants in Southeast Asia 1650-1800; Indian merchants and the decline of Indian mercantile activity: the Coromandel case; Trade and political dominion in south India, 1750-1790: changing British-Indian relationships; Weavers, merchants and company: the handloom industry in southeastern India 1750-1790; Index.

'Reading Arasaratnam’s collected essays ought to remind us of how often he has had the first word in outlining new issues and in opening up new fields to enquiry. The debt which we owe him is very considerable.' Journal of the Economic and Social History of the Orient 'Those interested in Indian maritime and economic history in the early modern period have reason to be appreciative of the Ashgate Publishing Limited for including over the last few years in the Variorum Collected Studies Series the work of several leading scholars in this field' The International History Review 'It is good to see the essays of a pioneer in his field under one cover.' VIERTELJAHRSCHRIFT FUR SOZIAL UND WIRTSCHAFTSGESCHICHTE, Vol. 84, No. 2 (translated from German)