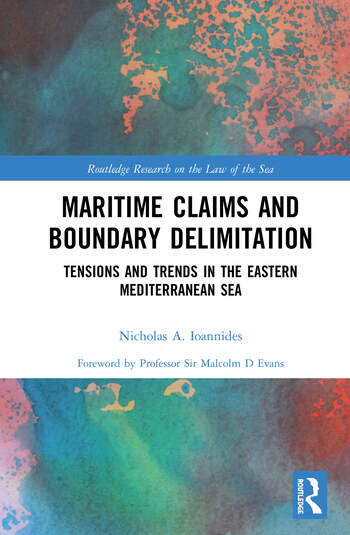 Maritime Claims and Boundary Delimitation: Tensions and Trends in the Eastern Mediterranean Sea

This book looks at the major developments triggered by the hydrocarbon discoveries in the East Mediterranean over the last twenty years, focusing on maritime boundary delimitation.

Examining the impact that the hydrocarbon discoveries have had on the application of the law of the sea rules by the East Med states, the book looks at the new trends concerning the implementation of the law of the sea in the region. The book analyses regional state practice in terms of maritime delimitation, namely the conclusion of bilateral agreements based on the law of the sea rules, both conventional and customary, reflecting the East Med states’ willingness to cooperate in order to reap the benefits of the energy windfall. Alongside this analysis, an outline of the hydrocarbon discoveries and the pertinent maritime activities is given, as well as further coverage of the overlapping maritime claims and disputes between Greece, Cyprus and Turkey on one side, and Lebanon and Israel on the other. Moreover, the book examines the validity of maritime claims made by or through non-state entities in the region, namely the State of Palestine, the UK Sovereign Base Areas and the so-called 'Turkish Republic of Northern Cyprus' and their potential impact on the delimitation agreements already in place. The book argues that the East Med paradigm concerning the successful application of the pertinent norms in maritime delimitation, proves that international law is resilient and capable of providing solutions in other turbulent regions around the globe.

This book will be of interest and importance to academics and students of international law, professionals in the oil and shipping industries, legal professionals and government agencies.

2. The Maritime History of the Eastern Mediterranean

3. International conferences on the law of the sea

3.2. The East Med states’ approach towards the LOSC

3.3. Core law of the sea issues and the East Med states’ positions

3. Analysis of the East Med states’ maritime claims outside the region

4.3. The background of the maritime delimitation agreements in the East Med

4.4. The provisions of the EEZ delimitation agreements

4.5.2. Israel - Cyprus agreement on exchange and non-disclosure of confidential information (2014)

5.2. Exchange of letters, the stance of the international community and trilateral meetings

2. The East Med states’ claims and practice under international law

4. Hydrocarbon and other activities in undelimited maritime areas in the East Med

4.1. The maritime area between the Greek islands of the southeastern Aegean Sea and Cyprus

4.2. The maritime dispute between Israel and Lebanon

5.2. The continental shelf delimitation between Turkey and the ‘TRNC’

2. The State of Palestine

2.2. Maritime and energy rights of the State of Palestine

3. The United Kingdom’s Sovereign Base Areas on Cyprus

3.2. The legal status of the SBAs under UK, Cyprus, EU and international law

3.3. The maritime domain off the SBAs

3.4. The Annan Plan provisions on the SBAs

3.5. The Mauritius – UK dispute over the Chagos Archipelago

Nicholas A. Ioannides is Adjunct Lecturer of Public International Law at the University of Nicosia, Cyprus.

Maritime Claims and Boundary Delimitation: Tensions and Trends in the Eastern Mediterranean Sea