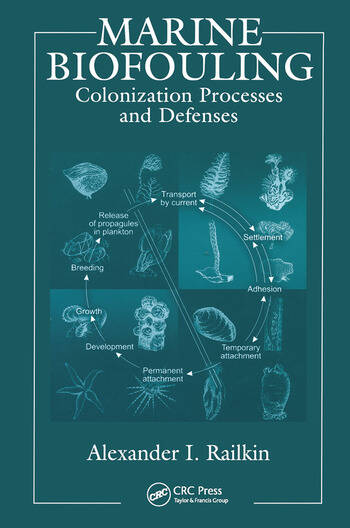 Recent instances of bioinvasion, such as the emergence of the zebra mussel in the American Great Lakes, generated a demand among marine biologists and ecologists for groundbreaking new references that detail how organisms colonize hard substrates, and how to prevent damaging biomass concentrations.

Marine Biofouling: Colonization Processes and Defenses is the English language version of a comprehensive work by eminent Russian scientist Alexander I. Railkin, who details the causes of vast biomass concentrations on submerged hard substrates. He also delivers a quantitative description of colonization processes and provides detailed models for preventing biofouling.

This volume expounds on many topics rarely discussed in the frame of one book: types of hard substrate communities; comparison of hard and soft substrate communities; harm caused by micro- and macrofoulers; larval taxes and drift; mechanisms of settlement and attachment of microorganisms, invertebrates, ascidians and macroalgae; the impact of currents; protection from epibionts; industrial biofouling protection; successions on hard substrates; and the recovery of disturbed communities or the self-assembly of communities. The text includes much Russian-language research translated for the first time.

Through a thorough examination of substrate organisms and an exploration of preventive methods, this monograph prepares those concerned with marine biology to help protect the self-purifying organisms that keep marine ecosystems healthy and productive.

THE GENERAL MODEL OF PROTECTION AGAINST BIOFOULING

"The organization of this book breaks down this complex problem into its fundamental biological and ecological components. … This is an important reference resource for specialists of all kinds."
- Southeastern Naturalist, Vol. 3, No. 3, 2004

"The English translation of this monograph makes accessible for the first time a great number of Russian-language works on an important topic of marine ecology. …the writing is scientific and technical, the information is of great value both to biologists and to those practicing marine trades."
-Northeastern Naturalist, Issue 12/4, 2005