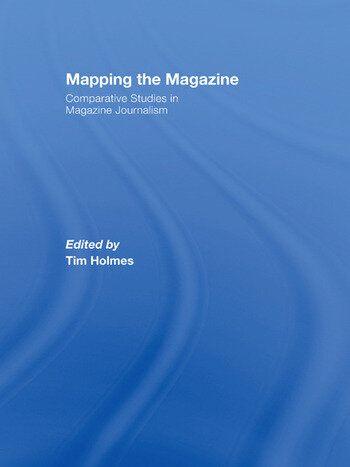 The media and more recently journalism have provided rich areas of study for many years but magazines, perhaps the most prolific single medium, have been largely ignored. Mapping The Magazine aims to redress the balance with an unprecedented collection of original, scholarly, detailed but wide-ranging examinations of the magazine form. Drawing on a variety of theoretical approaches and a wealth of titles from around the world, the contributions demonstrate just how significant the magazine has been, and continues to be, in the realm of journalism and cultural production.

From the science magazines of the Victorian era to women’s magazines of South Africa and Israel, via rock music and photojournalism past and present, the material in Mapping The Magazine illuminates and explores the all-encompassing, global and historical nature of the subject matter.

Some of the most notable names in the field of magazine studies, including John Hartley, Sammye Johnson, David Abrahamson, Bethan Benwell, and Patrick Roessler contribute research based analyses of various aspects of magazine journalism from around the globe and across a wide historical span.

This book will help to establish the magazine as a medium which is not only suitable for research but which also opens up a huge new field of possibilities.

2. Why Should They Care? The Relationship of Academic Scholarship to the Magazine Industry  Sammye Johnson

3. Pornography For Women, Or What They Don’t Show You In Cosmo!  Clarissa Smith

4. New Sexism? Readers’ Responses to the use of Irony in Men’s Magazines  Bethan Benwell

5. Before Cosmopolitan: The Girl in German Women Magazines in the 1920s  Nina Sylvester

7. Global Players, Émigrés, And Zeitgeist Magazine Design and the interrelation between the US and Germany  Patrick Roessler

8. Johannesburg Lunch-Hour 1951-1963: The emergence and development of the humanist photographic essay in Drum magazine  Darren Newbury

9. Consumer Magazines In South Africa And Israel: Toward a Socio-Semiotic Approach to Magazine Research  Sonja Narunsky-Laden

10. The Changing Face Of Women’s Magazines In Russia  Sian Stephenson

11. The Rise Of The Gossip Press In Spain  Manuela Bueno, María Luisa Cárdenas and Lola Esquivias

13. ‘Everything Louder Than Everything Else’: The Contemporary Metal Music Magazine and its Cultural Appeal  Andy R Brown

15. Magazine Exceptionalism: The Concept, The Criteria, The Challenge  David Abrahamson

Tim Holmes is the course co-ordinator of the Postgraduate Diploma in Magazine Journalism at Cardiff University and founder of the Mapping The Magazine series of conferences.