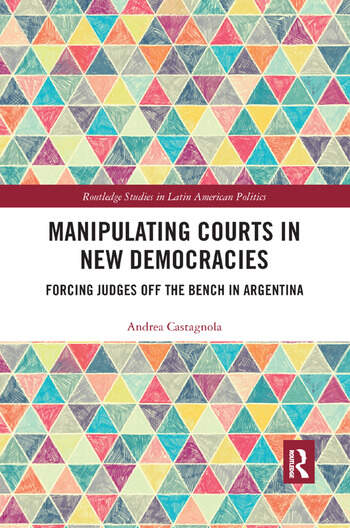 Manipulating Courts in New Democracies: Forcing Judges off the Bench in Argentina

When can the Executive manipulate the composition of a Court? What political factors explain judicial instability on the bench?

Using original field data from Argentina's National Supreme Court and all twenty-four Provincial Supreme Courts, Andrea Castagnola develops a novel theory to explain forced retirements of judges. She argues that in developing democracies the political benefits of manipulating the court outweigh the costs associated with doing so. The instability of the political context and its institutions causes politicians to focus primarily on short-term goals and to care mostly about winning elections. Consequently, judiciaries become a valuable tool for politicians to have under their control.

Contrary to the predictions of strategic retirement theory, Castagnola demonstrates that there are various institutional and non-institutional mechanisms for induced retirement which politicians have used against justices, regardless of the amount of support their party has in Congress. The theoretical innovations contained herein shed much needed light on the existing literature on judicial politics and democratization. Even though the political manipulation of courts is a worldwide phenomenon, previous studies have shown that Argentina is the theory-generating case for studying manipulation of high courts.

2. Judicial turnover in new democracies: forcing judges off the bench

3. The political history of the manipulation of the Argentinean Supreme Court

4. Forcing justices off the bench: empirics from the Argentinean Supreme Court

5. The persistent manipulation of courts: empirics from the provincial Supreme Courts in Argentina

6. The institutional determinants of judicial turnover at the subnational level

Manipulating Courts in New Democracies: Forcing Judges off the Bench in Argentina