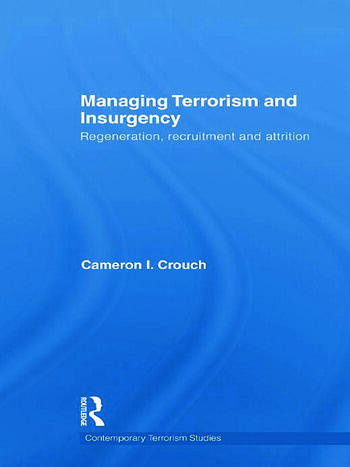 This book examines how governments can weaken the regenerative capabilities of terrorist and insurgent groups.

The exploration of this question takes the form of a two-tier examination of three insurgent actors whose capacity to regenerate weakened in the past: the Front de libération du Québec (FLQ) of Canada, the Movimiento de Liberación Nacional - Tupamaros (MLN-T) of Uruguay and the Provisional Irish Republican Army (PIRA) of Northern Ireland during the mid-1970s.

At the first level of its examination, the book investigates the extent to which the regenerative capacities of the FLQ, MLN-T, and PIRA weakened because of an increase in attrition and a decrease in recruitment. The primary objectives of this analysis are to uncover whether a declining intake of recruits played a lesser, equal, or greater role than a burgeoning loss of personnel in weakening the capacities to regenerate of the three insurgent actors; and, in turn, to shed greater light on the broader validity of the prevailing view in conflict studies that a decrease in recruitment is more important than an increase in attrition in effecting the corrosion of an insurgent actor's capacity to regenerate.

At the second level of its exploration, the book assesses the effectiveness of five of the most prominent policy prescriptions in the literature and insurgent recruitment and attrition: ameliorating grievances, selective repression, discrediting insurgent ideology, improving intelligence collection, and restricting civil liberties

This book will be of much interest to students of terrorism and counter-terrorism, conflict studies, strategic studies and security studies in general.

Cameron Crouch is currently an Analyst at Allen Consulting Group, an Australian economics and public policy consulting firm. He has a PhD from the Strategic and Defence Studies Centre at The Australian National University.

Cameron Crouch is an analyst at Allen Consulting Group, an Australian economics and public policy consulting firm. He has a Phd in Strategic and Defence Studies from the Australian National University.