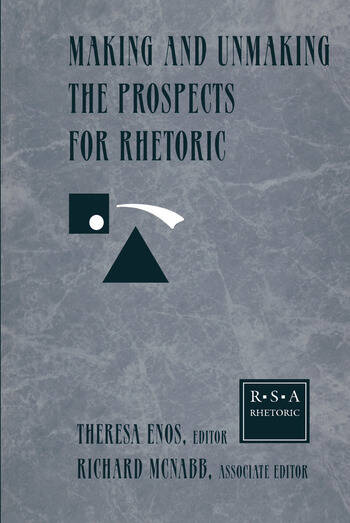 Making and Unmaking the Prospects for Rhetoric: Selected Papers From the 1996 Rhetoric Society of America Conference

The 1996 Meeting of the Rhetoric Society of America commemorated the 25th anniversary of the publication of Lloyd Bitzer and Edwin Black's The Prospect of Rhetoric. In so doing, the conference gave scholars and teachers in various disciplines from all over the country the opportunity to talk about new prospects for rhetoric. The conferees were asked to present their vision of rhetoric studies or to demonstrate what rhetoric studies could be by example. Their essays, presented in this volume, illustrate a discipline at odds over the future and demonstrate the continued influence and vitality of other papers, on the same subject, published some 25 years ago.

"There are essays of consequence here for the principal disciplines which stake a claim to something called rhetoric: communication, composition, classics....there is at least a substantial core of significant work to satisfy a specialist from any of the disciplines named. And there's enough of interest besides to invite precisely the sort of cross- and multi-disciplinary thinking about the prospects of/for rhetoric that this book, like its predecessor, intends to foster."
—CCC

Making and Unmaking the Prospects for Rhetoric: Selected Papers From the 1996 Rhetoric Society of America Conference