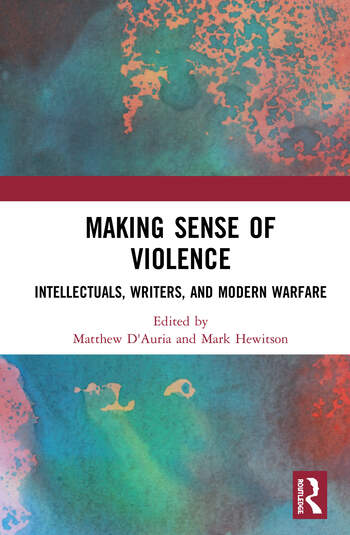 This book looks at the representations of modern war by analysing texts and examining the ways in which authors related to the atrocious horrors of war.

Rejecting the assumption that violence is simply a denial of reason or, at best, a pathological form of collective sadism, this book considers it ‘a cultural act’ that needs to be understood as underpinned by a series of shared and accepted norms and values stemming from a society at a given moment of its history and shaped by its language. Traditional vocabulary and language seem inadequate to describe soldiers’ experience of modern warfare. The problem for writers was to depict and render intelligible a dramatically unprecedented reality through recourse to something familiar. For some historians and literary critics, the absurdity of the First World War has shaped our ironic and disenchanted reading of the entire twentieth century. Yet these ways of coping with the urge to communicate inexpressible feelings and emotions in most cases were not sufficient to overcome the incoherence of the sentiments felt and the events witnessed.

The contributors attempt to address the questions and issues that are posed by the highly ambiguous views, texts and representations examined in this volume.

This book was originally published as a special issue of the journal, European Review of History: Revue européenne d'histoire.

1. Memory in warfare: history as a destituent narrative

3. Culture, resistance and violence: guarding the Habsburg Ostgrenze with Montenegro in 1914

4. Sender, those who have not returned: Carlo Salsa and his ‘Trenches’

5. A war of words: the cultural meanings of the First World War in Britain and Germany

8. The experience and the idea of war in the writings of Simone Weil and Marguerite Duras

Matthew D’Auria is an intellectual historian working at the University of East Anglia, UK. His main research interest lies is the relationship between images of the nation and discourses about Europe in the modern age.

Mark Hewitson is a Professor of German History and Politics at University College London, UK. His research interests lie principally in the intellectual, cultural and political history of nineteenth and twentieth-century Germany and Europe.