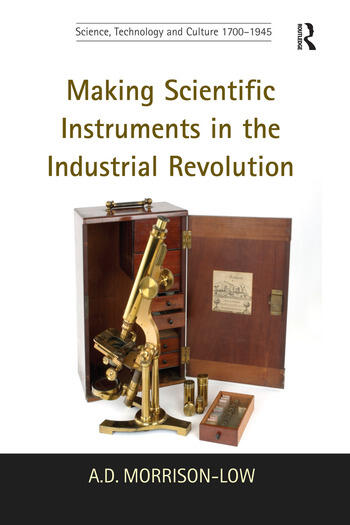 At the start of the Industrial Revolution, it appeared that most scientific instruments were made and sold in London, but by the time of the Great Exhibition in 1851, a number of provincial firms had the self-confidence to exhibit their products in London to an international audience. How had this change come about, and why? This book looks at the four main, and two lesser, English centres known for instrument production outside the capital: Birmingham, Liverpool, Manchester and Sheffield, along with the older population centres in Bristol and York. Making wide use of new sources, Dr Morrison-Low, curator of history of science at the National Museums of Scotland, charts the growth of these centres and provides a characterisation of their products. New information is provided on aspects of the trade, especially marketing techniques, sources of materials, tools and customer relationships. From contemporary evidence, she argues that the principal output of the provincial trade (with some notable exceptions) must have been into the London marketplace, anonymously, and at the cheaper end of the market. She also discusses the structure and organization of the provincial trade, and looks at the impact of new technology imported from other closely-allied trades. By virtue of its approach and subject matter the book considers aspects of economic and business history, gender and the family, the history of science and technology, material culture, and patterns of migration. It contains a myriad of stories of families and firms, of entrepreneurs and customers, and of organizations and arms of government. In bringing together this wide range of interests, Dr Morrison-Low enables us to appreciate how central the making, selling and distribution of scientific instruments was for the Industrial Revolution.

Winner of the Paul Bunge Prize, 2008, honouring outstanding publications on the history of scientific instruments. ’In all, this is a very useful book and, although it will ultimately go into the TATHS library, I won't let it go just yet. I want to re-read it several times more to make sure that I fully appreciate it.’ Journal of the Tools and Trades History Society ’... this erudite yet engaging monograph... Morrison-Low's work has important implications for all students of the industrial revolution... Morrison-Low is to be congratulated for elucidating the broader significance of this small but crucial industry.’ EH.NET ’A.D. Morrison-Low has provided an outstanding integrative history of instrument making that many of us perhaps secretly aspire to but seldom attain. This is a substantial achievement and raises her work far above the caliber and importance of most other writings on the history of scientific instruments and their manufacture... It would be remiss to conclude this review without mention of the useful appendix and the superb bibliography that grace this outstanding work.’ History and Philosophy of the Life Sciences ’Making Scientific Instruments in the Industrial Revolution is a welcome and timely book... If you are looking for an empirical survey of instrument making, delightfully illustrated, roughly spanning the period 1750 to the Great Exhibition in London of 1851, this is a book for you.’ Technology and Culture ’...Morrison-Low has assembled an impressive array of sources - directories, business records (the few that remain), probate and insurance records, first-hand accounts, among many others - with much of the data usefully illustrated and summarized in the many graphs and charts. The evidence from these sources is brought together very effectively through a self-consciously cross-disciplinary approach that will make this book a model for future studies. ... Commendable for its excellent survey of existing literature