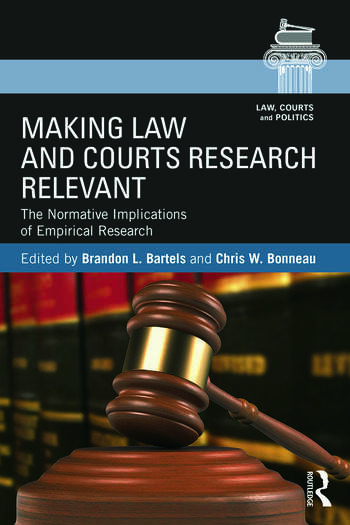 One of the more enduring topics of concern for empirically-oriented scholars of law and courts—and political scientists more generally—is how research can be more directly relevant to broader audiences outside of academia. A significant part of this issue goes back to a seeming disconnect between empirical and normative scholars of law and courts that has increased in recent years.

This volume represents the start of a conversation on the topic of how the normative implications of empirical research in law and courts can be made more visible. This book will primarily interest scholars of law and courts, as well as students of judicial politics. Other subfields of political science engaging in empirical research will also find the suggestions made in the book relevant.

Preface Brandon L. Bartels and Chris W. Bonneau. Part I: The Enterprise of Normative Implications of Empirical Research  1. The Normative Implications of Empirical Research: A Research Agenda Chris W. Bonneau and Brandon L. Bartels  2. Some Ideas on How Political Scientists Can Develop Real World Implications from Their Research (Without Becoming Policy Wonks or Law Professors) Lee Epstein, Jack Knight, and Andrew Martin  3. The Rule of Law as a Law of Rules Barry Friedman  Part II: Law and Decisionmaking  4. Judicial Behavior and the Counter-Majoritarian Difficulty Lawrence Baum  5. On Substance and Rhetoric in Constitutional Law Jamal Greene  6. The Role of Courts in the Policy Making Process Ian Turner  7. Racial Logic in Judicial Decision-Making: The Legal Reproduction of White Domination Wendy Moore  Part III: Judicial Selection  8. Advice and Consent in a Polarized Era: Time to Pull a Normative Alarm Sarah Binder  9. The Different Manifestations of Representative Drift on U.S. State and Federal Courts Justine D’Elia and Jeffrey Segal  10. The Use and Abuse of Empirical Evidence in Support of Normative Arguments on Judicial Selection Charles Geyh  11. Bridging the Gap Between Science and Politics: The Judicial Elections Controversy Melinda Gann Hall  12. Unpacking the Debate on Judicial Appointments Outside the United States: What Research Might Be Able to Contribute to the Normative Conversation; Lori Hausegger and Troy Riddell  Part IV: Courts in the Broader Political and Societal Context  13. The Normative Element of Legitimacy; David Klein  14. Can the U.S. Supreme Court Have Too Much Legitimacy? James Gibson and Michael Nelson  15. Normative Implications of Government Noncompliance with Court Orders  David Hausman 16. The Relationship between Diversity on the Bench and the Legitimacy of the U.S. Courts Nancy Scherer  17. Day-to-Day Legitimacy: First Instance Forums Broadly Construed Herbert Kritzer  Part V: Conclusion  18. A Path Forward Brandon L .Bartels and Chris W. Bonneau

"The increasingly challenging public environment for social scientific research often compels scholars to draw policy and normative conclusions from their work. Doing so thoughtfully and carefully, however, is its own challenge. Bartels and Bonneau have assembled a veritable "who's who" in political science, law, and other fields to tackle this challenge head-on. The series of essays that make up this valuable collection offer both explicit advice and valuable examples for engaging with broader audiences. It should be required reading for scholars (new and old) who are grappling with the prescriptive aspects of their empirical work, and how best to connect with those outside the academy. "—Christopher Zorn, Pennsylvania State University

"Through systematic research, scholars have amassed a great deal of insight into the operations, decision-making, and consequences of the judicial system. Ironically, there is relatively little conversation between the researchers, who study the courts, and the policy makers, who manage them. Why? Bartels and Bonneau have assembled an impressive cast of political scientists and legal scholars to address this question --- and to offer some possible solutions. Both academics and governmental officials will benefit from reading this highly original and important book."

"Crisis can be opportunity. Recent efforts to cut funding for social science research provides the stimulus for this fresh and important examination of the growing gap between the supposedly value-neutral research on law and courts produced by the social sciences and the deeply normative and prescriptive analysis of the legal academy. Each badly needs to learn from the other. This volume demonstrates this divide is broad and deep – but it also provides more than a few steps on the long and much needed road to rigor and relevance."—