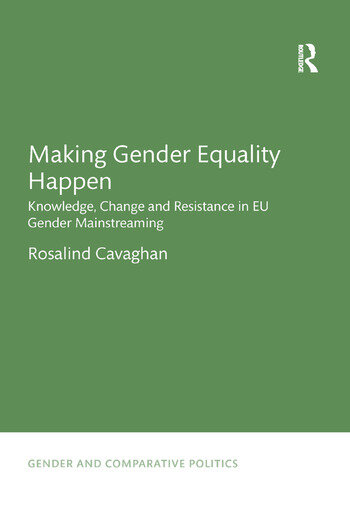 In theory, the EU’s ‘Gender Mainstreaming’ policy should mark it out as a trail-blazer in gender equality, but gender equality activists in Europe confront a knotty problem; most civil servants and policy makers can’t understand how to ‘mainstream’ gender.

Making Gender Equality Happen argues that we should take this problem seriously. In this book Cavaghan uncovers the social processes that make gender appear irrelevant to so many policy makers using a new method, gender knowledge contestation analysis. Building on this new perspective Cavaghan identifies:

These findings present fresh perspectives for policy makers and activists aiming to make gender equality happen. Cavaghan’s new method also opens fresh avenues in feminist EU studies, which are particularly relevant in the wake of the financial crisis, as the EU seems to be stepping away from its commitments to gender equality.

Chapter 5: ‘No Data, No Problem, No Policy’: Establishing Gender Mainstreaming in DG Research

Chapter 6: ‘Lets Say We Did Our Homework’: Gender Mainstreaming in ‘Directorate H’

Chapter 7: ‘Anything Pro-active, No.’ Gender Mainstreaming in ‘Directorate N’

Rosalind Cavaghan is a postdoctoral fellow at Glasgow Caledonian University. Her research combines the broad themes of European governance, public policy/global political economy and gender. She completed her PhD in Edinburgh, where she worked as a policy consultant, prior to commencing academic research.

'Feminist theory meet feminist praxis! This eminently readable and intellectually engaging book looks at the gap between official policies about gender equality in the European Union, which are many, and actual changes in gender relations to be more egalitarian, of which there are few, and asks how this happened. Cavaghan points to EU gender mainstreaming policy as a contested knowledge creation process not only to explain resistance but to understand how change happens when it does -- and how to produce more of it. Feminists who want to reveal, politicize and ameliorate inequalities in organizations should reach immediately for this book and the clear, smart and convincing analysis it offers.' — Myra Marx Ferree, Alice H. Cook Professor of Sociology, University of Wisconsin-Madison

'Politics and gender have to do with the contestation of norms, yet developing effective analytical tools to study this aspect of the field is no easy task. This path-breaking, sophisticated book develops the novel approach to Gender Knowledge Contestation to open the black box of policy implementation of gender mainstreaming in the EU. By systematically unpacking the policy process, it uncovers why and how change towards gender equality is promoted and resisted in EU institutions. It is a fascinating and compelling read that will change your way of looking at politics, gender, and the EU.' — Emanuela Lombardo, Senior Lecturer in Political Science, Madrid Complutense University

'In this text, Rosalind Cavaghan successfully brings together a variety of diverse literatures to develop a nuanced approach, coined "gender knowledge contestation". This approach is novel in its attention to written policies, as well as the ways in which practitioners understand and interpret gender as a concept. As such, Cavaghan opens our eyes to the micro-level of policy making, while keeping the larger macro-level process still very much in view. The book is innovative, well-conceived, accessible and exceptionally well-executed. It offers the researcher and practitioner new tools and ways of thinking about gender and gender mainstreaming. In short, this book is a must read for scholars and practitioners of gender equality in Europe and beyond.'

‘Why does Gender Mainstreaming fail or succeed? Rosalind Cavaghan takes the example of the EU’s research policy to analyze this key problem of gender politics. Her interpretative GKC policy tool allows scholars to study how feminist knowledge about the social construction of gender is translated into practical policy-making. Her innovative conceptual tool will be very inspiring for future research. The empirical findings make Cavaghan’s book a must-read for EU, policy, and gender scholars.’ — Gabriele Abels, Jean Monnet Chair of European integration, University of Tübingen

'The book offers a systematic and innovative approach to tackling one of the key questions of EU studies: why is there such a great variation in the adoption and implementation of gender mainstreaming? … The book builds on a literature that has documented the limitations of gender mainstreaming and really unpacks the different ways that mainstreaming can be opposed or frustrated. In doing so, it points to a way forward for activists and scholars seeking to understand how change can be brought about. The book uses a particular case study of the field of research policy, but the methodology and the overall framework could potentially be applied across policy areas, and even to issues besides gender mainstreaming.' — Muireann O'Dwyer, EuropeNow Journal

‘Making Gender Equality Happen constitutes an important step forward in the literature on gender mainstreaming. That one would wish for more is proof of this and amounts to an invitation to others to develop the reorientations that this book initiates.’ — Elisabeth Prügl, Critical Policy Studies