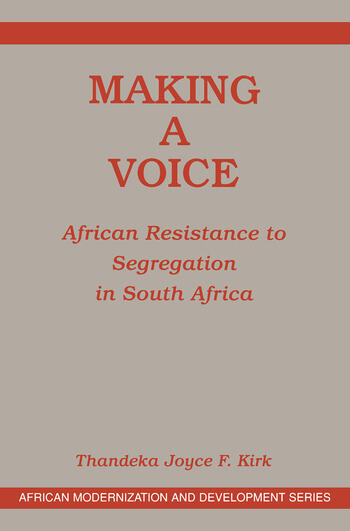 Making A Voice: African Resistance To Segregation In South Africa

Since apartheid's dissolution in the early 1990s and its formal abolishment in April 1994, there has been increasing interest in the early history of African struggles against segregation and apartheid. This book focuses on the resistance to segregation in the eastern cape town of Port Elizabeth, long known for its tradition of political protest. Joyce Kirk presents a detailed study of men and women in South Africa as they sought to create their own space and voice within the emerging urban areas of nineteenth and early twentieth-century South Africa.In Making a Voice, Kirkexplores the roots of the tradition of resistance among members of the emergent African working and middle class who were, much earlier than previously realized, living permanently in the growing urban areas. Kirk also examines the changing ideological, economic, and political forces that influenced the colonial government to pursue legislation aimed at depriving Africans of land, housing, and property in the towns, as well as political rights and freedom of movement. Finally, Kirk identifies the ways Africans challenged the government's attempt to use public-health laws to impose residential segregation, the factors that undermined the largely political alliance between whites and blacks in the Cape colony, and the role African women played in challenging racial segregation.

Making A Voice: African Resistance To Segregation In South Africa