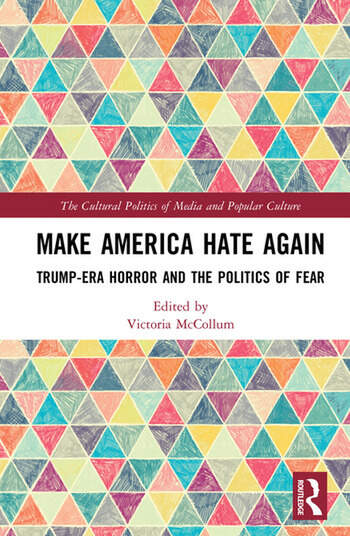 Horror films have traditionally sunk their teeth into straitened times, reflecting, expressing and validating the spirit of the epoch, and capitalising on the political and cultural climate in which they are made. This book shows how the horror genre has adapted itself to the transformation of contemporary American politics and the mutating role of traditional and new media in the era of Donald Trump’s Presidency of the United States. Exploring horror’s renewed potential for political engagement in a socio-political climate characterised by the angst of civil conflict, the deception of ‘alternative facts’ and the threat of nuclear or biological conflict and global warming, Make America Hate Again examines the intersection of film, politics, and American culture and society through a bold critical analysis of popular horror (films, television shows, podcasts and online parodies), such as 10 Cloverfield Lane, American Horror Story, Don’t Breathe, Get Out, Hotel Transylvania 2, Hush, It, It Comes at Night, South Park, The Babadook, The Walking Dead, The Woman, The Witch and Twin Peaks: The Return. The first major exploration of the horror genre through the lens of the Trump era, it investigates the correlations between recent, culturally meaningful horror texts, and the broader culture within which they have become gravely significant. Offering a rejuvenating, optimistic, and positive perspective on popular culture as a site of cultural politics, Make America Hate Again will appeal to scholars and students of American studies, film and media studies, and cultural studies.

Part 1: ‘Drain the Swamp [...] We All Float Down Here!’ The Evil Clown Archetype, Trump’s Circus of Cruelty and the Freak Show of US Politics in American Horror

1. ÒLet’s Put a Smile on that Face:Ó Trump, the Psychotic Clown and the History of American Violence

Part 2: ‘A (Nasty) Woman’s Place is in the Resistance!’ Trump’s War on Women, ‘Pussy’ Grabs Back and Queer Horror Steps Out of the Shadows

3. Breaking Out and Fighting Back: Female Resistance in the Trump-Era Horror Film Joshua Gulam

4. An End to Monstrosity: Horror, Queer Representation, and the Trump Kakistocracy Marshall Moore

5. Trauma, Repression and The Babadook: Sexual Identity in the Trump Era

Part 3: ‘We All Bleed Red!’ Of God and Monsters, Targeted Bodies and Metaphorical Walls in Trump-Era Horror

6. Lock Her Up! Angry Men and the Captive Woman in Post-Recession Horror

7. ÒI Told You Not To Go Into That HouseÓ: Get Out and Horror’s Racial Politics

8. Securing the Borders: Isolation and Anxiety in The Witch, It Comes at Night, and Trump’s America

Part 4: ‘You’ve Been Trump’d [...] Get Out (of the White House)!Ó Animated Alternatives and Horror-Centric Parodies and Podcasts, Reimagined ˆ la Trump

11. Get Out (of the White House): The Trump Administration and YouTube Horror Parody as Social Commentary

Part 5: Now You’re in the Sunken Place... With a Damn Fine Cup of ‘Covfefe’. The Dangers of Nostalgia and the Darkness of Future Past in the Age of Trump

13. ‘There is No Return’: Twin Peaks and The Horror of Pleasure

Martin Fradley and John A. Riley

Victoria McCollum is Lecturer in Cinematic Arts at the Ulster University, UK. She is the author of Post-9/11 Heartland Horror: Rural Horror Films in an Era of Urban Terrorism and the co-editor of HBO’s Original Voices: Race, Gender, Sexuality and Power and Alternative Media in Contemporary Turkey: Sustainability, Activism and Resistance.