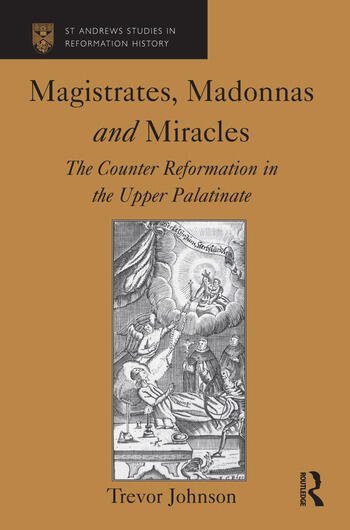 Magistrates, Madonnas and Miracles: The Counter Reformation in the Upper Palatinate

In 1621, in one of the earliest campaigns of the Thirty Years' War, the South German principality of the Upper Palatinate was invaded and annexed by Maximilian of Bavaria, director of the Catholic League. In the subsequent years the eyes of Europe looked to the fate of this erstwhile hub of the 'Calvinist international', as Maximilian steadily moved to convert its population to Catholicism. This study is the first account in English to focus on this important instance of forced conversion and the first account in any language to place the political impact of the Thirty Years' War into the broader context of the Upper-Palatinate's religious culture examined over the longue durée, from the later sixteenth to the mid-eighteenth centuries. The book analyses the rich unpublished sources of church and state from Bavarian and Roman archives, as well as printed texts in varied genres to reconstruct the region's sacred system and to gauge the effectiveness of the campaign of conversion. This allows the study to address questions of how the re-catholicisation was achieved, how a religious culture infused with the spirit of the Counter Reformation developed and how this change shaped the identity of its people. More than this, however, the book also uses the Upper Palatinate case-study to draw broader conclusions about the strengths and limitations of the Confessional model, and suggests other ways of looking at religious change and identity formation in early modern Europe which embraces popular religious culture and voluntary religion, as well coercion. As such the book offers much, not only to scholars of early modern Germany, but to all with an interest in the formation, adoption and imposition of religious identity during this period.

Contents: Introduction; Part I 'The Palatinate Deformed': Forges, fortresses and farms: the Obere Pfalz in the 16th and 17th centuries; A Protestant land, 1556-1621. Part II 'The Palatinate Informed': 'The odious name of a Reformation': biconfessional discontents; 'Wolves among the flock': conversion, emigration and resistance; 'The salt of the earth': clerical restoration and renewal; The return of the religious. Part III 'The Palatinate Reformed': Shaping a Catholic society; 'Lest such devotion should fall into decline': sacraments, sacramentals and the sacred image; 'All things to all': reclaiming the saints; 'Mountains of grace': the sacred enshrined; The Devil in the Oberpfalz; Conclusion; Bibliography; Index.

’Approximately one quarter of the population of the Holy Roman Empire converted back to Catholicism during the sixteenth and seventeenth centuries. Quite simply, Johnson’s monograph is the best study I am aware of that considers how this process took place at the local level, and it should be required reading for anyone interested in the Catholic side of the Reformation.’ Renaissance Quarterly 'Trevor Johnson produced a fine study of the Counter-Reformation before his sudden and premature death in 2007. Magistrates, Madonnas and Miracles demonstrates Johnson’s immense talents as a historian and only reinforces how much his passing was a loss to the field.' German History 'Johnson's study thus reads as a fascinating case study of a region that had one of the most controversial histories of reform and counter-reform in the sixteenth and seventeenth centuries. It is lamentable that this text, so admirably edited by Simon Ditchfield and Raingard Esser, represents the author's final word, for as this volume shows, this would have been a career of unique achievement.' Catholic Historical Review 'The publication of this rich and stimulating book has been long awaited. ... Johnson has provided scholars with a stimulating book full of vital ingredients that may enable them to compose a larger, European narrative of Catholic conquest and revival in the early modern period.' Sixteenth Century Journal '...recommended to scholars of popular religion and the early-modern period for several reasons...a groundbreaking contribution to European Reformation and early-modern studies.' Religious Studies Review ’The end result is a book that is not only packed with interesting historical detail, it also teems with insights about the process of early modern religious reform in general. ... As was the case with its author, this book will leave any historian feeling richer for having come across it.’ English Historical Review

Magistrates, Madonnas and Miracles: The Counter Reformation in the Upper Palatinate