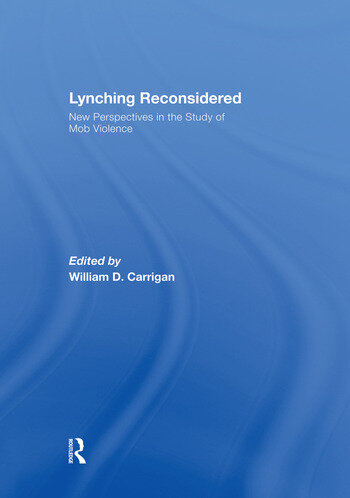 Lynching Reconsidered: New Perspectives in the Study of Mob Violence

The history of lynching and mob violence has become a subject of considerable scholarly and public interest in recent years. Popular works by James Allen, Philip Dray, and Leon Litwack have stimulated new interest in the subject. A generation of new scholars, sparked by these works and earlier monographs, are in the process of both enriching and challenging the traditional narrative of lynching in the United States.

This volume contains essays by ten scholars at the forefront of the movement to broaden and deepen our understanding of mob violence in the United States. These essays range from the Reconstruction to World War Two, analyze lynching in multiple regions of the United States, and employ a wide range of methodological approaches.

Lynch Law Reversed: The Rape of Lula Sherman, the Lynching of Manse Waldrop, and the Debate over Lynching in the 1880s

Resolving the Paradox of Our Lynching Fixation: Reconsidering Racial Terror in the Nineteenth Century

Lynching Photography and the Visual Reproduction of White Supremacy

The Lynching of Immigrants in the U.S. South

WILLIAM D. CARRIGAN IS ASSOCIATE PROFESSOR OF HISTORY AT ROWAN UNIVERSITY IN GLASSBORO, NEW JERSEY. HIS FIRST BOOK WAS THE MAKING OF A LYNCHING CULTURE: VIOLENCE AND VIGILANTISM IN CENTRAL TEXAS, 1836-1916. HE IS CURRENTLY AT WORK WITH CLIVE WEBB ON A STUDY OF MOB VIOLENCE AGAINST MEXICANS IN THE UNITED STATES.

Lynching Reconsidered: New Perspectives in the Study of Mob Violence