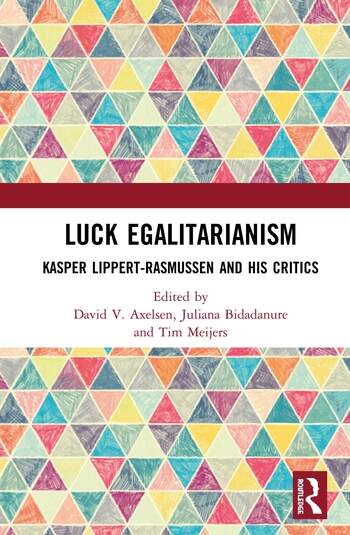 This edited volume offers a critical discussion of luck egalitarianism – one of the most prominent views in contemporary political philosophy – through an exploration of the theory of one of its leading proponents, Kasper Lippert-Rasmussen.

When (if ever) can inequalities in how well peoples’ lives go be justified? Luck egalitarianism provides an appealing answer: inequalities are just if, and only if, they are the result of the exercise of individual responsibility. Kasper Lippert-Rasmussen lucidly defends and specifies this view in his own book Luck Egalitarianism. The authors in this volume offer a critical discussion of the key features of his view. They discuss disagreements within views which assign an important role to responsibility. They go on to push the limits of luck egalitarianism: what about inequalities between us and the dead? And inequalities between groups? Finally, they criticize some of the central tenets of luck egalitarianism, including its tendency to avoid action-guiding judgements and its focus on distributions rather than interpersonal relations.

This book was originally published as a special issue of Critical Review of International Social and Political Philosophy.

3. Justice as fairness and bad luck

4. How generous should egalitarians be?

5. Are inequalities between us and the dead intergenerationally unjust?

6. On Who matters: extending the scope of luck egalitarianism to groups

7. Equality, value pluralism and relevance: Is luck egalitarianism in one way good,

but not all things considered?

David V. Axelsen is LSE Fellow in the Department of Government at the London School of Economics, UK.

is Assistant Professor of Philosophy and, by courtesy, of Political Science at Stanford University, USA.