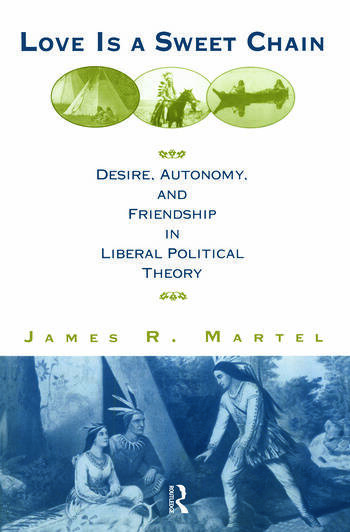 Love is a Sweet Chain: Desire, Autonomy and Friendship in Liberal Political Theory

Notions of love intersect with ideas on personal liberty, obligation, individuality, self, and difference in this study. James Martel contends that theorists' inattention to the subject has impoverished our explorations of political discourse.

"Love is a Sweet Chain is far more than a rich and compelling reading of Hobbes, Locke, Rousseau, Emerson and Thoreau. A genealogy of love in political theory, a political theory of love, a deconstruction of the antinomy between love and politics, a feminist politics of love, a careful desacralization of love and friendship, and a rethinking of the bonds between citizens and between citizen and state in liberalism---in one short book, Martel breaks ground on all of this virgin territory. Perhaps he has even inaugurated a new domain of inquiry in political theory; fortuitously, it is an inauguration rich in erudition, imagination, and subtlety." -- Wendy Brown, Professor of Political Science, University of California, Berkeley and author of States of Injury
"Love is a Sweet Chain is not only a learned guide to the political theory of love from the Greeks to the present that will be of immense value to historians but also a contribution to thinking about the place of the body in how we understand humanity and mutual obligation. Hobbes ends up the unlikely hero. And, whether we accept Martel's view or not, it is exhilarating to follow, with him, liberalism's road-not-taken as a possible route to a new understanding of respect, responsibility, and inclusion. Not just theorists and historians but anyone who thinks about the nature of community and moral obligation will be provoked and enlightened by this book." -- Thomas W. Laqueur, Professor of History, University of California, Berkeley and author of Making Sex: Body and Gender from the Greeks to Freud

Love is a Sweet Chain: Desire, Autonomy and Friendship in Liberal Political Theory