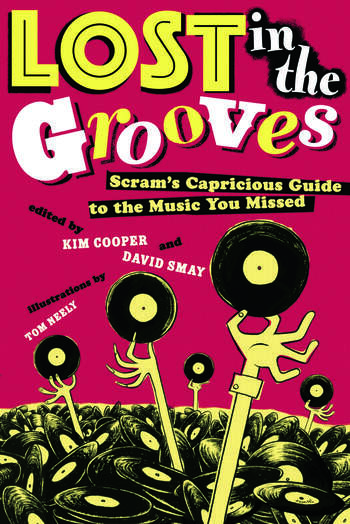 Lost in the Grooves: Scram's Capricious Guide to the Music You Missed

Do you remember these great pop stars and their hits? Deerhoof's The Man, The King, The Girl Butch Hancock's West Texas Waltzes and Dust Blown Tractor Tunes, Swamp Dogg's Cuffed, Collared and Tagged, Michael Head's The Magical World Of The Strands, John Trubee's The Communists Are Coming to Kill Us, John Phillips's Wolf King of L.A., and Michel Magne's Moshe Mouse Crucifiction? You will when you read Lost in the Grooves, a fascinating guide to the back alleys off the pop music superhighway.
Pop music history is full of little-known musicians, whose work stands defiantly alone, too quirky, distinctive, or demented to appeal to a mass audience. This book explores the nooks and crannies of the pop music world, unearthing lost gems from should-have-been major artists (Sugarpie DeSanto, Judee Sill), revisiting lesser known works by established icons (Marvin Gaye's post-divorce kissoff album, Here My Dear; The Ramones' Subterranean Jungle), and spotlighting musicians who simply don't fit into neat categories (k. mccarty, Exuma). The book's encyclopedic alphabetical structure throws off strange sparks as disparate genres and eras rub against each other: folk-psych iconoclasts face louche pop crooners; outsider artists set their odd masterpieces down next to obscurities from the stars; lo-fi garage rock cuddles up with the French avant-garde; and roots rock weirdoes trip over bubblegum. This book will delight any jukebox junkie or pop culture fan.

Kim Cooper and David Smay are founders/coeditors of the fanzine, Scram, which is devoted to pop music obscurities. Scram was an editor's choice in Factsheet 5 for "unusually great writing" and sited by LA Weekly as a best-of-LA publication. They are coeditors of Bubblegum Music Is the Naked Truth: The Dark History of Prepubescent Pop from the Banana Splits to Britney Spears.

"Lost in the Grooves is a genre-surfing Smithsonian of overlooked musical marvels. Without fetishizing obscurity for its own sake, the Guide sidesteps cynical cool vs. uncool upsmanship and celebrates castoffs -- by both the forgotten and the famous -- which exude trend-transcending merit. Each entry compels you to seek out the music." -- Irwin Chusid, WFMU DJ and author of Songs in the Key of Z: The Curious Universe of Outsider Music
"Caprice is everything, and SCRAM's lost grooves are a music geek's very heaven. The zinester spirit of lauding the officially uncool lives on in this eminently dip-worthy collection." -- Barney Hoskyns, author and editor of Rock's Backpages, The Online Library of Rock & Roll
"Kim Cooper and David Smay have scored again with their invaluable guide to the best sounds you've never heard. Impeccably researched, refreshingly subjective, they almost make being obscure as much fun as being rich and famous. Of course, they forgot to mention my band.." -- Blag Dahlia of The Dwarves
"Scram is truly a resource for those musicians just outside the windows of top-forty-land, those songwriters and guitar slingers looking for an outlet for their own particular brand of art. Accordingly, Lost in the Grooves takes up where Scram leaves off -- a compilation of ruminations from 75 critics and music aficionados detailing their favorite slices of the scene... Lost in the Grooves is not a book for fans mad about one band or one particular singer. Instead, this is a book for the serious music fan, for those serious students of the art form curious about who-influenced-who and what sound rose out of what region. Like turning on a radio station and listening to a feverish wounded-voiced DJ tell you the reason behind every record you never heard, there's 20 new things to be learned on every page here
." -- Electric Review
"What makes Lost in the Grooves a real groovy read is the honest passion its contributors exhibit for their lost-and-found faves.

." -- Mojo Magazine
"Music trivia fans who enjoy the offbeat and odd get all the stories behind these selected notables-but-not-greats. Highly recommended
." -- Bookwatch

Lost in the Grooves: Scram's Capricious Guide to the Music You Missed