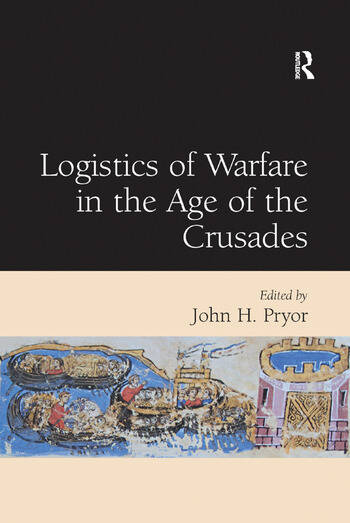 Logistics of Warfare in the Age of the Crusades

How were the Crusades made possible? There have been studies of ancient, medieval and early modern warfare, as well as work on the finances and planning of Crusades, but this volume is the first specifically to address the logistics of Crusading. Building on previous work, it brings together experts from the fields of medieval Western, Byzantine and Middle Eastern studies to examine how the marches and voyages were actually made. Questions of manpower, types and means of transportation by land and sea, supplies, financial resources, roads and natural land routes, sea lanes and natural sailing routes - all these topics and more are covered here. Of particular importance is the attention given to the horses and other animals on which transport of supplies and the movement of armies depended.

John H. Pryor is an Associate Professor at the University of Sydney, Australia in the Centre for Medieval Studies.

’This volume is a must for medieval and military historians and for armchair generals...The standard throughout is exceptionally high...I cannot stress enough that Haldon and Pryor are setting standards which everyone must now follow. I cannot praise this collection of papers highly enough. It really does mark the development of an innovative approach to the subject of crusading warfare and it should inspire many young researchers.’ Military History ’Taken as whole, this is an impressive collection. Quite apart from the considerable intrinsic value of the papers themselves, what this book does is show how much can be achieved from sources which at first sight look unpromising and which rarely, if ever, give the sort of statistical information on which historians of later epochs rely. Professor Pryor is to be congratulated on organizing what was evidently a most stimulating meeting and producing a volume of essays that will come to be seen as marking a significant advance in our understanding of medieval warfare.’ Bulletin of the School of Oriental and African Studies ’By placing discussion of campaigns and long-distance travel on a realistic footing, in many cases it seems for the first time, the work ought to force some major revision of accepted ideas and attitudes.’ International Journal of Maritime History ’This collection pushes new boundaries in historical understanding and is to be warmly recommended for this achievement.’ Crusades

Logistics of Warfare in the Age of the Crusades