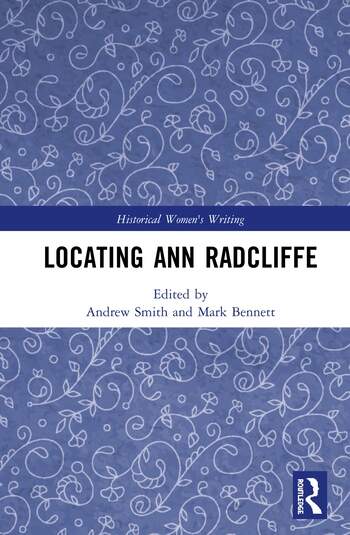 This volume broadens the critical understanding of Ann Radcliffe’s work and includes explorations of the publication history of her work, her engagement with contemporary accounts of aesthetics, her travel writing, and her poetry.

Ann Radcliffe (1764-1823) was the best-selling author of the eighteenth century and her Gothic novels set the tone for a generation of Gothic writers. Regarded as having made a pioneering contribution to the Female Gothic of the period she was also an important critic of the Gothic’s different forms. This collection also includes an analysis of Radcliffe’s account of her medical ailments in her Commonplace Book which provides a new way of thinking about female bodies in pain and how they are represented in her novels.

The collection provides an important critical reassessment of a major Gothic writer of the period. It will be of interest to scholars working on the Gothic, eighteenth-century literature, and women’s writing. This book was originally published as a special issue of Women’s Writing.

3. Radcliffe’s Aesthetics: Or, the Problem with Burke and Lewis

4. The Masquerade in Ann Radcliffe’s The Mysteries of Udolpho and The Italian

5. "As Like as Peppermint Water is to Good French Brandy": Ann Radcliffe and Hester Lynch Salusbury (Thrale) Piozzi

Andrew Smith is Professor of Nineteenth-Century English Literature at the University of Sheffield, UK. His published books include Gothic Radicalism: Literature, Philosophy and Psychoanalysis in the Nineteenth Century (2000), Victorian Demons: Medicine, Masculinity and the Gothic at the Fin-de-Siècle (2004), Gothic Literature (2007, revised 2013), The Ghost Story 1840–1920: A Cultural History (2010), and Gothic Death 1740–1914: A Literary History (2016). He is a past president of the International Gothic Association.

Mark Bennett completed his PhD at the University of Sheffield, UK, on the relationship between travel writing and Gothic fiction in Radcliffe and other eighteenth-century authors. He currently works in student communications and HE policy. His publications include work on Ann Radcliffe, travel writing, and Victorian popular fiction.