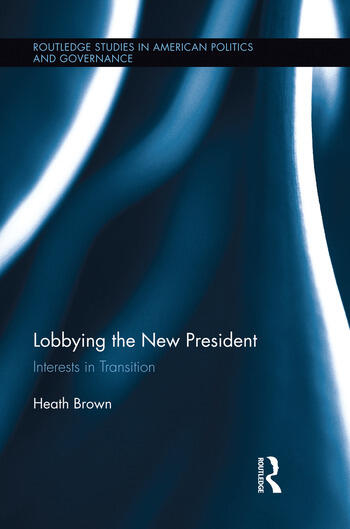 Presidential transitions offer the chance for new ideas, policies, and people to inhabit the White House. Transitions have triggered policy change for decades and eager interest groups have sought ways to capitalize on this often chaotic phase of US politics. President-Elect Barack Obama declared that lobbyists would be forbidden from serving his transition and issued stiff regulations and rules to limit their access to the planning for his White House. Yet even though Obama’s efforts mirror previous Presidents anti-lobbyist efforts, all Presidential transitions provide certain channels of influence, and Obama himself chose the head of a powerful and politically oriented think tank, the Center for American Progress, to run his transition. New Presidents need the information, ideas, and political capital that groups possess. Thus a curious paradox.

This book is a valuable resource that goes beyond the field of presidency studies which American politics scholars as well as public policy specialists should not go without.

Heath Brown is an Assistant Professor in the Department of Political Science and Public Affairs at Seton Hall University.

"This is the most in-depth description of presidential transitions ever written. It does not only attain a high academic standard for accuracy but due to its practicality it will become a bible for every lobbying organization in Washington D.C. for years to come."

Heath Brown’s study of the role that interest groups play during presidential transitions, from staffing the administration to setting the president’s policy agenda, is a much-needed addition to the growing literature on how decisions are made by the incoming president and advisors between Election Day and the inaugural."

"This is an important book on a very consequential topic. Heath Brown provides the definitive account to date concerning the activities and impact of interest groups during presidential transitions. The book is readable, well-documented, and an important contribution to understanding this crucial period for a presidency as well as the role of interest groups in our politics."
—John P. Burke, University of Vermont