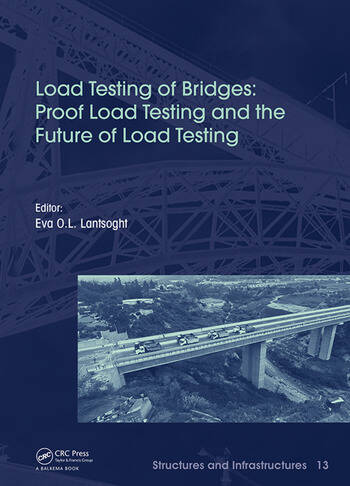 Load Testing of Bridges, featuring contributions from almost fifty authors from around the world across two interrelated volumes, deals with the practical aspects, the scientific developments, and the international views on the topic of load testing of bridges.

Volume 13, Load Testing of Bridges: Proof Load Testing and the Future of Load Testing, focuses first on proof load testing of bridges. It discusses the specific aspects of proof load testing during the preparation, execution, and post-processing of such a test (Part 1). The second part covers the testing of buildings. The third part discusses novel ideas regarding measurement techniques used for load testing. Methods using non-contact sensors, such as photography- and video-based measurement techniques are discussed. The fourth part discusses load testing in the framework of reliability-based decision-making and in the framework of a bridge management program. The final part of the book summarizes the knowledge presented across the two volumes, as well as the remaining open questions for research, and provides practical recommendations for engineers carrying out load tests.

This work will be of interest to researchers and academics in the field of civil/structural engineering, practicing engineers and road authorities worldwide.

Dr. Lantsoght graduated with a Master’s Degree in Civil Engineering from the Vrije Universiteit Brussel (Brussels, Belgium) in 2008. She later earned a Master's degree in Structural Engineering at the Georgia Institute of Technology (Atlanta, Georgia, USA) in 2009 and the title of Doctor in Structural Engineering from Technische Universiteit Delft (Delft, the Netherlands) in 2013. The work experience of Dr. Lantsoght includes design work in structural and bridge engineering in Belgium (Establis, and Ney & Partners) and working as an independent consultant in structural engineering in Ecuador (Adstren). Dr. Lantsoght is an active member of the technical committees of the Transportation Research Board in Concrete Bridges (AFF-30) and Testing and Evaluation of Transportation Structures (AFF-40), a member of the technical committees of the American Concrete Institute and Deutscher Ausschuß für Stahlbeton Shear Databases (ACI-DAfStb-445-D), and the joint ACI-ASCE (American Society of Civil Engineers) committee on Design of Reinforced Concrete Slabs (ACI-ASCE 421), and an associate member of the committees on Evaluation of Concrete Bridges and Concrete Bridge Elements (ACI 342), on Shear and Torsion (ACI-ASCE 445), and on Strength Evaluation of Existing Concrete Structures (ACI 437). In the academic field, Dr. Lantsoght is a full professor at the Universidad San Francisco de Quito (Quito, Ecuador) and a researcher at Technische Universiteit Delft (Delft, Netherlands). Her field of research is the design and analysis of concrete structures and analysis of existing bridges.