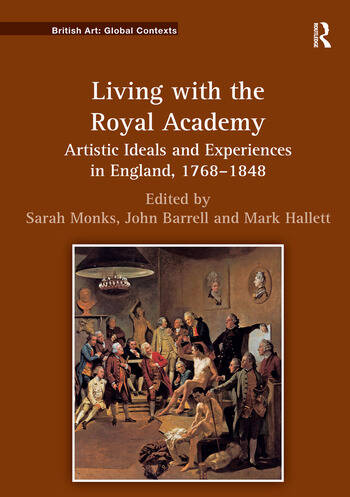 Living with the Royal Academy: Artistic Ideals and Experiences in England, 1768–1848

Living with the Royal Academy: Artistic Ideals and Experiences in England, 1768-1848 offers a range of case studies which consider individual artists' personal, professional and artistic relationships with the Royal Academy during the late eighteenth and early nineteenth centuries, bringing together the research of leading historians of British artistic culture during this period. Over its introduction and nine essays, this collection considers the Academy as a lived organism whose most effective role, following its establishment in 1768, was as a reference point towards, around and against which artists operated in their relationships with each other and with artistic practice itself. In so doing, this collection also considers the relationship between Academic ideals and individual practice (as well as lived experience) during this period of art’s increasingly public manifestation at the Academy. Individual artists examined include Joshua Reynolds, Joseph Wright of Derby, Benjamin West and William Etty. Thinking beyond the dichotomy of loyalism and rebellion - and complicating notions of the Academy as a monolithic ossifying institution from which progressive artists would be ’liberated’ in the wake of the Pre-Raphaelite Brotherhood’s emergence in 1848 - this volume investigates the Academy’s varied impact upon the lives, experiences and ideals of its diverse artistic communities.

Sarah Monks is Lecturer in Art History at the University of East Anglia, UK.

John Barrell is Professor of English at Queen Mary University of London, UK.

Mark Hallett is Director of Studies at the Paul Mellon Centre for Studies in British Art, London, UK.

'... the many fascinating insights offered by Living with the Royal Academy make a useful contribution toward the rewriting of the history of British art during the first century or so of the Royal Academy’s existence.' CAA Reviews

Living with the Royal Academy: Artistic Ideals and Experiences in England, 1768–1848