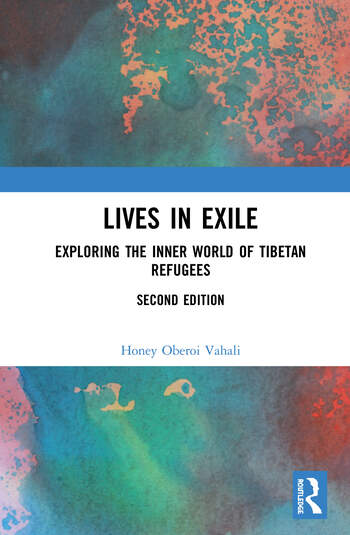 Lives in Exile: Exploring the Inner World of Tibetan Refugees

This book explores the devastating consequences and psychological ruptures of refugeehood as it evocatively recounts the life histories of dislocated Tibetans expelled from their homes since 1959. Following the genre of a story, the book offers dynamic understandings of unconscious processes and the intergenerational transmission of trauma across generations of an exiled and internally displaced people. The book analyses the paradoxical spaces which Tibetans in exile occupy as they strive to preserve their cultural and spiritual heritage, rituals, religion, and language while also dynamically remoulding themselves to adapt to their living realities. Presenting a nuanced picture, it narrates stories of refugees, political prisoners and survivors of torture along with stories of loss and angst, cultural celebrations and political demonstrations. The author in this new edition highlights and explores the art, artists, and poetry in the exiled community. The volume also looks at the significance of Buddhism and the philosophy of the Dalai Lama for the people in exile and the personal and collective will of the community to connect their lost past to a living present and an imagined future. Rooted in the psychoanalytical tradition, this book will be of interest to psychologists, sociologists, political scientists, scholars of literature, and arts and aesthetics. It will also appeal to those interested in Sino-Tibetan relations, Buddhist studies, South Asian Studies, cultural and peace studies, and those working with refugees, and displaced persons.

Preface. Acknowledgements. Introduction to the Second Edition. Introduction. Part I: Story of Tibet I 1. No Time to Bid Adieu: Life-stories from the Generation that Fled 2. Children of Exile: The Second Generation 3. Divergent Paths: Predicaments of the Dalai Lama’s Youthful Children Part II: Story of Tibet II 4. The Life and Times of Young Recent Arrivals 5. Prisoners of Conscience Part III: Self and Exile 6. Glimpses into the Inner World of the Tibetan Refugee Appendix I: A Chronology of Some Relevant Political Events in the Recent History of Tibet Appendix II: A Brief Statement on the Rise of Communism in China and its Advent in Tibet Appendix III: Towards a Common Ground: Communism, Buddhism and Psychoanalysis Bibliography. Index.

Honey Oberoi Vahali is a Psychoanalyst, Clinical Psychologist and Professor of Psychology at the School of Human Studies, Ambedkar University Delhi, India. For over two decades, she has been closely involved with the political movement of the exiled people of Tibet living in India. As a researcher and psychotherapist, the author has been exploring bridges and inter-relational spaces between psychoanalysis, existentialism, radical spiritualties and engaged social activism.

Lives in Exile: Exploring the Inner World of Tibetan Refugees