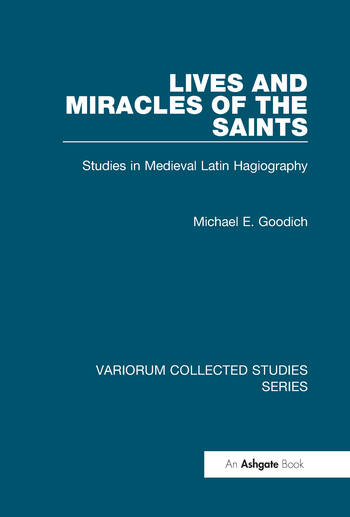 Lives and Miracles of the Saints: Studies in Medieval Latin Hagiography

Hagiography is a rich source for our knowledge of many aspects of medieval culture and tradition. The lives and miracles of the saints may be read on several levels, both as an expression of the dominant ideology and as a reflection of long-term themes in medieval society. The essays in this volume attempt to exploit the Latin hagiographical sources of the medieval West as means of illuminating our understanding of a variety of such themes: childhood and adolescence, elite and popular religion, sainthood and politics, the mechanism of canonisation, women in the church, dreams, visions and the concept of the miraculous, and the convergence of heresy, disbelief and piety.

Contents: Preface; The Childhood and Adolescence of the Saint: Childhood and adolescence among the 13th-century saints; Bartholomaeus Anglicus on child-rearing; Encyclopaedic literature: child-rearing in the Middle Ages; Il fanciullo come fulcro di miracoli et potere spirituale (XIII e XIV secolo); A saintly child and a saint of children: the childhood of Elizabeth of Thuringia (1207-31); JÃ¼dische und christliche Traumanalyse im zwÃ¶lften Jahrhundert. Hagiography and the Politics of Canonisation: The politics of canonization in the 13th century: lay and mendicant saints; A profile of 13th-century sainthood; A note on sainthood in the hagiographical prologue; The contours of female piety in later medieval hagiography; Ancilla Dei: the servant as saint in the later Middle Ages; Vision, dream and canonization policy under Pope Innocent III; The use of direct quotation from canonization hearing to hagiographical Vita et miracula; Innocent III and the miracle as a weapon against disbelief. Medieval Miracles and their Uses: Miracles and disbelief in the late Middle Ages; Battling the Devil in rural Europe: late medieval miracle collections; A chapter in the history of the Christian theology of miracle: Engelbert of Admont's (ca. 1250-1331) Expositio super Psalmum 118 and De miraculis Christi; Filiation and form in the late medieval miracle story; The miraculous military escape in canonization documents; Liturgy and the foundation of cults in the 13th and 14th centuries; Index.

'This welcome volume brings together twenty previously published essays by Michael Goodich, one of today's most prolific and interesting scholars of medieval hagiography... these articles chart not only the development of a single scholar's work, but, even more importantly, that of an increasingly prominent and creative subdiscipline of medieval studies. This collection will be useful to all serious students of medieval hagiography in providing the articles of an important and influential scholar in convenient form. The book, moreover, demands their attention as a whole as evidence for the development of their craft. It should be acquired by all college and university libraries.' The Catholic Historical Review '... the volume will certainly be of use to students of sainthood and hagiography, not least because it brings together a substantial quantity of Goodich's work in one place... In their informed and informative studies, both authors have done much to place the saints and their biographers at the centre of debates over religious, cultural and political interaction in the later Middle Ages.' Ecclesiastical History

Lives and Miracles of the Saints: Studies in Medieval Latin Hagiography