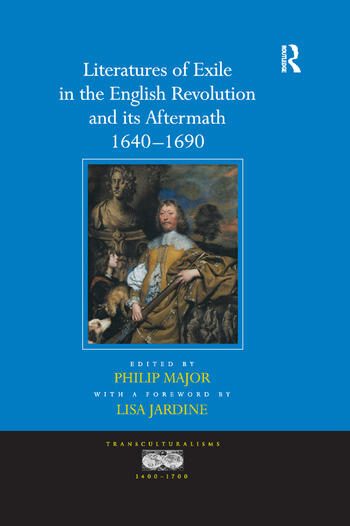 Literatures of Exile in the English Revolution and its Aftermath, 1640-1690

Original and thought-provoking, this collection sheds new light on an important yet understudied feature of seventeenth-century England's political and cultural landscape: exile. Through an essentially literary lens, exile is examined both as physical departure from England-to France, Germany, the Low Countries and America-and as inner, mental withdrawal. In the process, a strikingly wide variety of contemporary sources comes under scrutiny, including letters, diaries, plays, treatises, translations and poetry. The extent to which the richness and disparateness of these modes of writing militates against or constructs a recognisable 'rhetoric' of exile is one of the book's overriding themes. Also under consideration is the degree to which exilic writing in this period is intended for public consumption, a product of private reflection, or characterised by a coalescence of the two. Importantly, this volume extends the chronological range of the English Revolution beyond 1660 by demonstrating that exile during the Restoration formed a meaningful continuum with displacement during the civil wars of the mid-century. This in-depth and overdue study of prominent and hitherto obscure exiles, conspicuously diverse in political and religious allegiance yet inextricably bound by the shared experience of displacement, will be of interest to scholars in a range of disciplines.

Contents: Foreword, Lisa Jardine; Introduction, Philip Major; Exiles, expatriates, and travellers: towards a cultural and intellectual history of the English abroad, 1640-1660, Timothy Raylor; Disruptions and evocations of family amongst Royalist exiles, Ann Hughes and Julie Sanders; A broken broker in Antwerp: William Aylesbury and the Duke of Buckingham's goods, 1648-1650, Katrien Daemen-de Gelder and J.P. Vander Motten; A tortoise in the shell: Royalist and Anglican experience of exile in the 1650s, Marika Keblusek; Exile, apostasy and Anglicanism in the English Revolution, Sarah Mortimer; Exile in Europe during the English Revolution and its literary impact, Nigel Smith; Abraham Cowley and the ends of poetry, Christopher D'Addario; 'Not sure of safety': Hobbes and exile, James Loxley; 'A poor exile stranger': William Goffe in New England, Philip Major; 'The good old cause for which I suffer': the life of a regicide in exile, Jason Peacey; Works cited; Index.

Philip Major teaches English at Birkbeck College, University of London. He has published widely on seventeenth-century literature and is currently writing a monograph on the works of Thomas, 3rd Lord Fairfax.

'"Exile'"is a condition which places a special kind of strain on every aspect of a person's life. Nevertheless, what these exiles learned from those they sometimes reluctantly engaged with contributed in important ways to their ways of thinking and writing once they returned. There were, too, continous currents of intellectual exchange between those in exile and those who remained behind. Only if we recognise this and take account of it can the intellectual and cultural history of the British Isles in the second half of the seventeenth century be fully understood. The essays in Literatures of Exile are eloquent testimony to the increased depth and richness to be discovered, if we scrutinise the surviving literary materials from this tumultuous political period inclusively - from both inside and outside Britain.' From the foreword by Lisa Jardine, Queen Mary University of London, UK '... a stimulating addition to one of the most vibrant areas of seventeenth-century studies.' Modern Language Review '[This] book does a good job of opening up new vistas on particular exiles’ experience of unfamiliar surroundings... shed[s] light on important topics that will interest scholars in several disciplines.' Literature and History '... a fine interdisciplinary collection of essays which will be valuable to scholars of seventeenth-century history and literature.' Notes and Queries 'The essays in Literatures of Exile are thoughtfully organized in such a way that encourages the reader to make clear links between neighboring essays and to follow various threads that run throughout the collection. Individually, the essays make substantial contributions to our understanding of the English Revolution and its complexities, but the true innovation of the collection is its sustained attention to methodology. ... As it both showcases and inspires new work, Literaturesof Exile is a successful model for any collection of essays.' Seventeenth-Century News

Literatures of Exile in the English Revolution and its Aftermath, 1640-1690