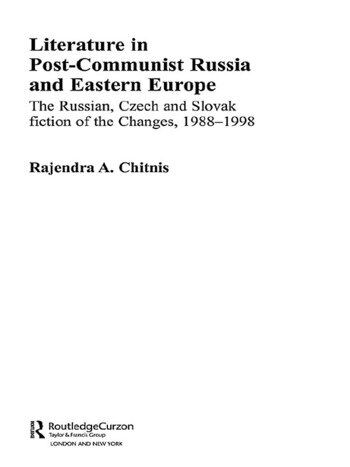 Literature in Post-Communist Russia and Eastern Europe: The Russian, Czech and Slovak Fiction of the Changes 1988-98

This book considers Russian, Czech and Slovak fiction in the late communist and early post-communist periods. It focuses on the most innovative trend to emerge in this period, on those writers who, during and after the collapse of communism, characterised themselves as 'liberators' of literature. It shows how these writers in their fiction and critical work reacted against the politicisation of literature by Marxist-Leninist and dissident ideologues, rejecting the conventional perception of literature as moral teacher, and redefining the nature and purpose of writing. The book demonstrates how this quest, enacted in the works of these writers, served for many critics and readers as a metaphor for the wider disorientation and crisis precipitated by the collapse of communism.

Rajendra A. Chitnis studied at the University of Sheffield and at the School of Slavonic and East European Studies, University College London, from which he received his PhD in 2003. Since 1999 he has held the post of lecturer in Russian and Czech Studies at the University of Bristol. His current research includes analysis of works by Tolstaia, Sorokin and Pelevin, Hrabal, Hodrová and Kahuda, and Vilikovský, Pi¹»anek and Balla. Alongside research into nineteenth- and twentieth-century Czech fiction, he is also interested in the development of learning materials for the study of Czech language and culture.

'We have a book here which offers valuable insights into an analysis of three literatures as they have evolved over the first decade following the collapse of Communism.' - MLR

Literature in Post-Communist Russia and Eastern Europe: The Russian, Czech and Slovak Fiction of the Changes 1988-98