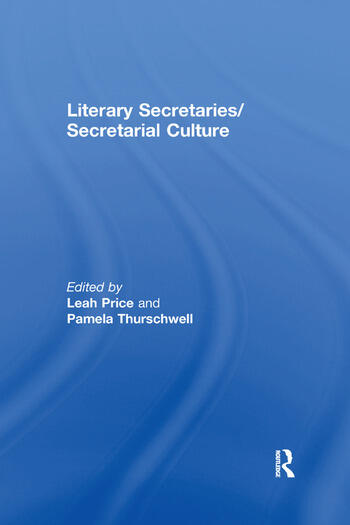 Secretaries are the hidden technicians of much literary (and non-literary) writing; they also figure startlingly often as characters in modern literature, film, and even literary criticism. Literary Secretaries/Secretarial Culture brings together secretaries' role in the production (and, more surprisingly, consumption) of modern culture with interpretations of their function in literature and film from Chaucer to Heidegger, by way of Dickens, Dracula, and Erle Stanley Gardner. These essays probe the relation of office practice to literary theory, asking what changes when literary texts represent, address, or acknowledge the human copyist or the mechanical writing machine. Topics range from copyright law to voice recognition software, from New Women to haunted typewriters and from the history of technology to the future of information management. Together, the essays will provide literary critics with a new angle on current debates about gender, labour, and the material text, as well as a window into the prehistory of our information age.

Leah Price is Professor of English at Harvard University. She is the author of The Anthology and the Rise of the Novel and contributes regularly to The London Review of Books; she is working on two books, Novel Media and The Stenographic Imagination. Pamela Thurschwell is Lecturer in English at University College London. She is the author of Literature, Technology and Magical Thinking, 1880-1920 and Sigmund Freud, and co-editor of The Victorian Supernatural.

'... the articles provide a much needed corrective to the critical tendency to represent the new systems for the sending, storing, and retrieving of data as the driving force in the transition from an industrial to knowledge economy... The results will be of interest not only to those concerned with the representation of laboring bodies in popular literature and culture, but with what it means to live at a time in which information is not so much a means of understanding the world as it is a kind of universal currency, the value of which demands the effacement of the manual labor of which it is a product... valuable collection of essays.' Victorian Studies