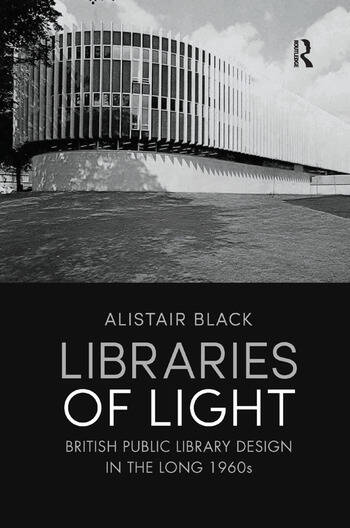 For the first hundred years or so of their history, public libraries in Britain were built in an array of revivalist architectural styles. This backward-looking tradition was decisively broken in the 1960s as many new libraries were erected up and down the country.

In this new Routledge book, Alistair Black argues that the architectural modernism of the post-war years was symptomatic of the age’s spirit of renewal. In the 1960s, public libraries truly became ‘libraries of light’, and Black further explains how this phrase not only describes the shining new library designs – with their open-plan, decluttered, Scandinavian-inspired designs – but also serves as a metaphor for the public library’s role as a beacon of social egalitarianism and cultural universalism.

A sequel to Books, Buildings and Social Engineering (2009), Black's new book takes his fascinating story of the design of British public libraries into the era of architectural modernism.

Chapter 1 The Long Journey to Libraries of Light

Chapter 2 Modernisation and Modernism: The Post-War Public Library and the Revolution in its Built Form

Alistair Black is Professor in the School of Information Sciences, University of Illinois at Urbana-Champaign, USA. He is author of A New History of the English Public Library (1996) and The Public Library in Britain 1914-2000 (2000). He is co-author of Understanding Community Librarianship (1997), The Early Information Society in Britain, 1900-1960 (2007) and Books, Buildings and Social Engineering (2009). He was Chair of the Library History Group of the Library Association, 1992–1999, and of the IFLA Section on Library History, 2003–2007. He was editor of the international journal Library History, 2004–2008, and the North American editor of Library and Information History, 2009–2013. He is general editor of the journal Library Trends.