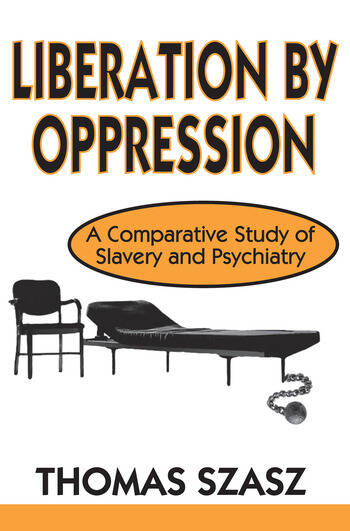 Liberation by Oppression: A Comparative Study of Slavery and Psychiatry

Originally called mad-doctoring, psychiatry began in the seventeenth century with the establishing of madhouses and the legal empowering of doctors to incarcerate persons denominated as insane. Until the end of the nineteenth century, every relationship between psychiatrist and patient was based on domination and coercion, as between master and slave. Psychiatry, its emblem the state mental hospital, was a part of the public sphere, the sphere of coercion.

The advent of private psychotherapy, at the end of the nineteenth century, split psychiatry in two: some patients continued to be the involuntary inmates of state hospitals; others became the voluntary patients of privately practicing psychotherapists. Psychotherapy was officially defined as a type of medical treatment, but actually was a secular-medical version of the cure of souls. Relationships between therapist and patient, Thomas Szasz argues, was based on cooperation and contract, as is relationships between employer and employee, or, between clergyman and parishioner. Psychotherapy, its emblem the therapist's office, was a part of the private sphere, the contract.

Through most of the twentieth century, psychiatry was a house divided-half-slave, and half-free. During the past few decades, psychiatry became united again: all relations between psychiatrists and patients, regardless of the nature of the interaction between them, are now based on actual or potential coercion. This situation is the result of two major "reforms" that deprive therapist and patient alike of the freedom to contract with one another: Therapists now have a double duty: they must protect all mental patients-involuntary and voluntary, hospitalized or outpatient, incompetent or competent-from themselves. They must also protect the public from all patients.

Persons designated as mental patients may be exempted from responsibility for the deleterious consequences of their own behavior if it is attributed to mental illness. The radical differences between the coercive character of mental hospital practices in the public sphere, and the consensual character of psychotherapeutic practices in the private sphere, are thus destroyed. At the same time, as the scope of psychiatric coercion expands from the mental hospital to the psychiatrist's office, its reach extends into every part of society, from early childhood to old age.

Liberation by Oppression: A Comparative Study of Slavery and Psychiatry