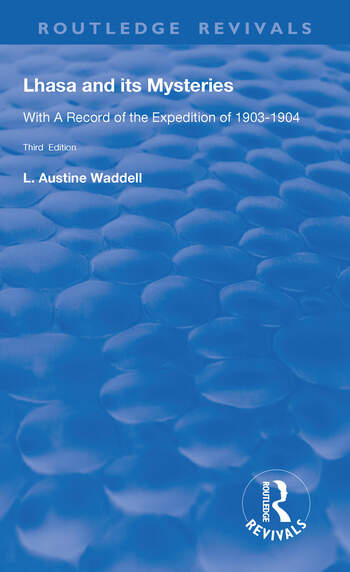 Lhasa and its Mysteries

First published in 1906, this volume emerged three years after the British expedition across the Alps to Lhasa, in which the author took part, and provided a first-hand British account of the mission. The expedition (also known as the British Invasion of Tibet) was intended to counter perceived Russian Imperial interests in access to India through Tibet. Its leaders did not anticipate the intention of Tibetans to resist the mission. The expedition allowed L. Austine Waddell, who had the opportunity to learn of Tibet during a previous posting at Darjeeling, to provide a first-hand account of Central Tibet, its capital at Lhasa, its Grand Lama religious hierarchy and its culture through following the narrative of the controversial British expedition. Despite the region’s historic relations with Asia, Europeans had previously had more difficulty accessing the country and its culture. This volume was the third edition in two years, having been made more accessible to accommodate for its favourable reception by the British public.

1. Lhasa the Forbidden. 2. The Grand Lama and his Evolution as the Priest-God of Lhasa. 3. How the British Mission Came to be Sent. 4. Forward! The Peaceful Mission Becomes an Armed Force. 5. Invasion of the Chumbi Valley Across the Jelep Pass and Occupation of Phari Fort. 6. Advance to Tuna on the Tibetan Plateau, Across the Formidable Tang Pass. 7. Wintering in Tibet. 8. On to Guru, with Battle at the Crystal Springs. 9. The Tibetan Army and its Leaders. 10. Dash on Gyantsé, Past the Lakes Rham and Kala, with Fight in the Gorge of the Red Idol. 11. Gyantsé – its Fort and Town. 12. Temples, Priests, and Convents of Gyantsé and Neighbourhood, with Visit to the Caves of the Entombed Hermits. 13. Besieged at Gyantsé. 14. Relief of Gyantsé and Storming of the Jong. 15. Gyantsé to Lhasa, Past the Yamdok Sea, and Across the Tsangpo Valley. 16. Lhasa, "the Seat of the Gods". 17. Temples and Monks in the Hermit City: the Lamas’ Holy of Holies. 18. Oracles and Sorcerers. 19. The Priest-God and His Palace. 20. Tea with the Regent, Ruler of Tibet. 21. Peace Negotiations and Signing of the Treaty. 22. Rambles Round Lhasa. 23. The Return Journey – Exploration of the Tsangpo Valley, and Snow-Bound at Phari.

Lhasa and its Mysteries